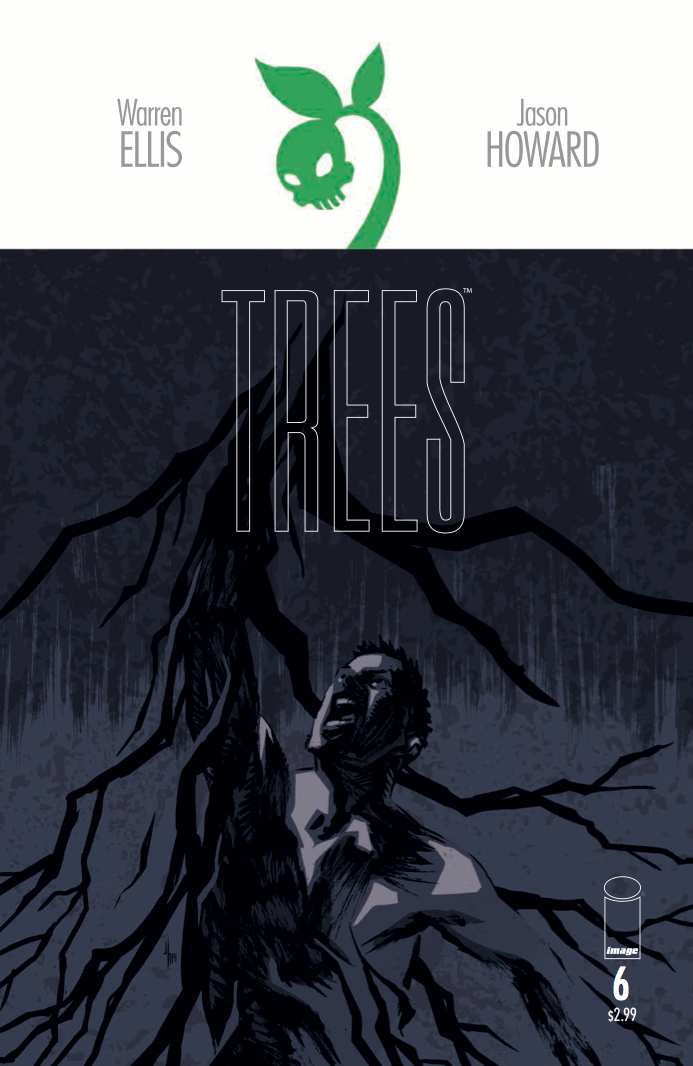 Where do we fit in the world? Are we capable of finding a place that will accept us without judgment? Is it even possible to be safe when greater powers act without regard to individual’s rights and liberties? These are some of the questions that Warren Ellis and Jason Howard are attempting to address in Trees, and they are the focus of Trees #6.

The majority of this issue focuses on the narratives surrounding Chenglei, a bisexual painter from rural China, and Eligia, an Italian woman attempting to gain power in an overtly masculine culture. They are both outsiders struggling to understand the setting in which they live and to create a place for themselves within it.

Chenglei’s story and his emerging romance with Zhen, a transgender woman, has been one of the highest highlights of the series thus far. That relationship is the centerpiece to this issue and occupies more than half of the pages within. There is a distinctive lack of high concept science fiction and action in this story. Unlike much of Trees the drama here is almost entirely based on human relationships and functions purely on that level. It is a story that could just as easily be set in certain parts of modern China without alien invasions. Uncle openly acknowledges the connection between Shu, the liberal city in which they live, and Shanghai.

All of this occurs in conversation. Speaking with both Uncle and then Zhen, Chenglei questions who he is and where he can exist. For the first time he acknowledges that he is bisexual. These are conversations that transform what had previously been subtext into text. They do not appear obvious or heavy handed though because of the setting in which they occur. The city of Shu has been shown to be a bastion of acceptance, the kind that can encourage this sort of open discourse. In fact their open acknowledgement of difficult issues, helps to transform Shu into an endearing character itself. It also makes the final pages of the comic all the more foreboding. 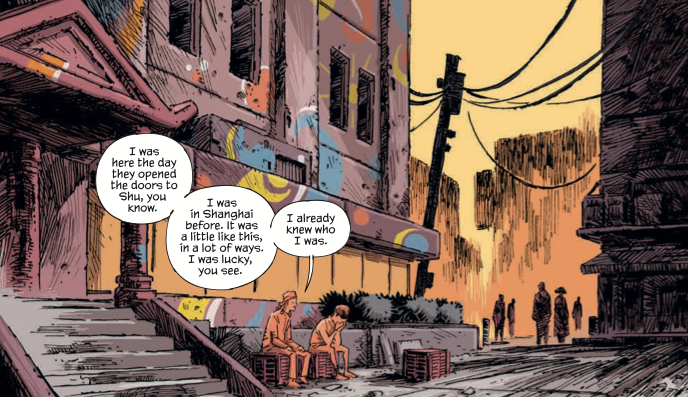 Shu exists under the shadow of the Chinese government and the appearance of a military drone does not bode well for the hope and progress found here. It crosses the line from foreshadowing into literal shadowing as it moves over the city. It creates a black X on the streets below, a sign of disruption and change. The hope for advancement and acceptance is under direct threat, and Ellis and Howard make no qualms about pointing to the Chinese government as the threat. Although the trees are the focus of the series, they do not appear as threatening as the people who claim to govern the land they rest upon. It is a direct commentary on the events in Hong Kong and throughout Xi Jinping’s China.

Although there is only dialogue found on these pages, Howard keeps these sequences interesting. Chenglei, Zhen, and Uncle are all expressive and in constant motion when talking. Howard understands how people actually communicate, where the look on someone’s face and the form of their body can be every bit as important as their words. He uses that knowledge to build upon Ellis’ dialogue, adding depth and personality to what is being said by showing how it is said.

Howard’s work displays a depth of understanding about how comics function. They are a visual medium and require visual engagement. Even the best crafted dialogue can become boring in a film or comic when it is conveyed by talking heads alone. Howard works to keep the characters active in their conversation. Their faces, bodies, and setting are commenting on the scene just as much as their words themselves, if not more so.

Eligia’s story reflects similar ideas from a very different perspective. All of the acceptance and open conversation in Shu is contrasted by the hateful philosophies and backstabbing in Cefalu, Italy. Her boyfriend runs a small fascist gang, one that preys upon closeted gay men in order to earn money. Cefalu provides a modern alternative to Shu, revealing the disparate perspectives on sexual orientation that can be found within two modernized countries. 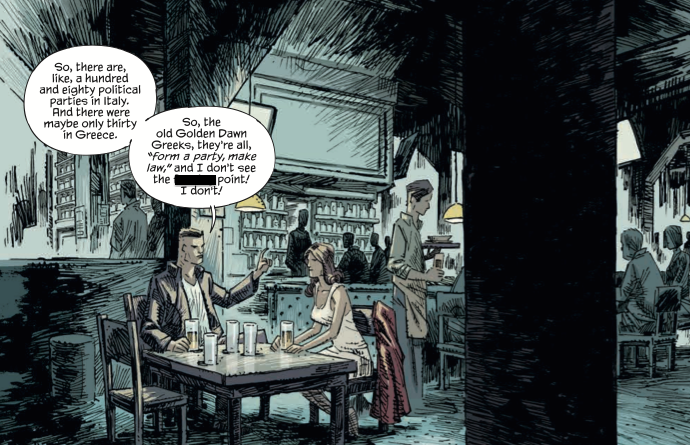 Howard’s colors help to contrast Eligia’s story from Chenglei’s. Eligia’s Italian home is cast in rain and clouds. Pale blues color both the interiors and exteriors of her setting. She, in her red coat, is an isolated component of warmth in a cool environment. This all works to emphasize that she is alone, and that this loneliness is impacting her outlook as she becomes angrier and begins to plot against the men who run her home. Chenglei, on the other hand is surrounded by warm oranges in most of his dialogue. The colors of Shu reflect a glowing diversity of life, one that helps to mirror the open conversations he has with Uncle and Zhen. That coloring shifts, along with the tone in the final panels where the drone appears. As its shadow is cast onto Shu, the city becomes a colder, more hostile place that feels much more like Eligia’s home.

Howard’s art and Ellis’ thematic connections are excellent. What troubles Trees #6 is the same problem that has affected each issue of the series to varying degrees: structure. Trees has introduced six distinct narratives thus far. Unlike a television series, Game of Thrones for example, where each installment is given ample time to check in with a wide variety of characters and plots, Trees is restricted to only about twenty pages. Within that space, it’s difficult to focus on many stories. The first issue did the best work of balancing the various threads, providing momentum to four separate plots. However, each subsequent issue has had trouble maintaining that balance.

Trees #6 contains brief asides to stories occurring in Northern Norway and Somalia. These pages don’t do much to forward these plots though. The final page seems to only serve as a reminder about what happened at the end of Trees #5, when a set of trees were militarized. The first page that shows Norway acts as nothing more than a disruption to Chenglei’s story. These moments only serve to disrupt the story, pulling focus away from the themes being focused upon in this issue. It is a difficult balancing act to tell so many stories in such limited space month after month. That doesn’t make the breaks in what is an otherwise thematically cohesive issue any more forgivable. The overall experience of a single issue of Trees often becomes an uneven one due to the comic’s structure.

Trees continues to provide some excellent commentary on modern political and economic situations within the guise of a high concept science fiction tale. The fractious nature of the story and its monthly schedule make for a troublesome presentation at times though. Ellis and Howard have a lot of valuable things to say in this comic, but will have to continue to refine the shape of the book in order to best present their ideas.

REVIEW: Trees #6 Asks What It Means to Find Safety