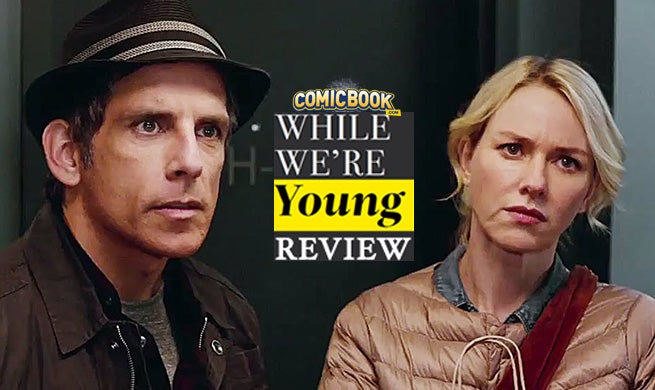 Ben Stiller has been making his rounds in the more serious adult drama genre lately, which is ironic because he's going to be revisiting Zoolander in a few months. 2013's Secret Life Of Walter Mitty wasn't a huge success, but a personal favorite of mine. It packed relatable inspiration, metaphorically telling you to follow your dreams of adventure through an exaggerated tale.

While We're Young had a somewhat similar message as Secret Life Of Walter Mitty, but through more grounded story-telling. Stiller doesn't direct this time around, instead Noah Baumbach gives the mature comedy his efforts.

While We're Young finds Josh (Ben Stiller) and Cornelia (Naomi Watts) at a point in their lives that is pretty boring for them, and at times, for the audience, too. They're in the middle of their forties surrounded by friends having babies and living lives that are anything but spontaneous- until a young couple sits in on Josh's documentary production lecture.

Jamie (Adam Driver) and Darby (Amanda Seyfried) rush into the lives of Josh and Cornelia. Jamie quickly plants a seed in Josh to become his good friend by complimenting his work on "Power Elite," a documentary Josh released a decade ago. The tenacity and enthusiasm Jamie brings to the table is just what Josh is looking for to boost his current documentary, which he is very passionate about but hasn't been able to complete even with 10 years of work.

Josh and Cornelia slowly distance themselves from their peers for the more exciting, younger pair of Jamie and Darby. Instead of going to lunch and hearing about their friends' lives and problems, they go on drug trips and to sunny cookouts with their new buddies. As you would guess, though, it's not all sunshine in paradise for the middle-aged duo looking for a spark.

Throughout the fun, Josh continues to piece together his 10 years work, trying to explain the power of government and this and that and other things that neither the characters nor audience will understand. The only thing that is important is that it's the of the most extremely niche topics there is and it sounds boring. Josh and Cornelia even come to collaborate with Jamie on a "Facebook" film that ends up becoming something much more than the original idea Jamie pitched to Josh, which is no coincidence.

Stiller masterfully plays his character who gets news of arthritis, is growing away from youth, and deals with all the issues aging throws at him. It's the typical Jason Bateman character but Stiller's Josh has such a heart for being good and being honest that it takes some fun out and is a little less likable.

From the second Jamie and Darby enter the movie, their characters are nothing if not predictable. While We're Young could've taken notes from Cornelia's father (Charles Grodin) when he criticized the first cut of Josh's film - "It's too long." Not that the run time of While We're Young is overwhelming by any means, but the first 45 minutes of the film are underwhelming. Along the 97 minute journey, you'll get a few laughs in place of the emotional connection required to root for Josh in his dilemma. Although Driver and Seyfried are wonderful, you won't know whether to love or hate Jamie and Darby which blurs the film's message.

Baumbach is able to present issues that maturing folks will have to deal with. For younger viewers, it may be terrifying, in fact. The thought of having kids or getting arthritis is not something a lot of people want to wrap their minds around in a movie theater, but Baumbach presents the issues tastefully, as if to say, "You're not alone." Stiller's comedic, yet sufficiently dramatic reaction to the arthritis news and Watts taking a hip hop class, in which she's at least 10 years older than anyone else in attendance, share the difficulties of growing into adulthood, which younger audiences won't yet be able to relate to.

The climax pulls you in both directions. Josh is painfully and pitifully presenting his argument for what is right, but in reality it doesn't actually matter to anyone except the select few people who are as strongly willed to be honest as Josh. There is no clear side to take or desirable outcome which muddles the message of the entire film you've now watched for about 75 minutes.

Bottom Line: While We're Young stumbles in pacing but contains a few sentimental moments and laughs that a mature crowd will enjoy. 6.9/10