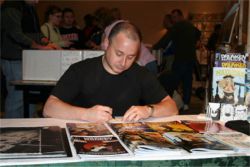 North Carolina based writer and artist Rich Stahnke readily admits that his comic creation, Chip the chimpanzee, had a unique origin. Not unique as in born with mutant powers, inspired by the violent death of parents or bombardment with cosmic rays, but unique in terms of the birth order of his main character’s identity. “I actually started with the title first,” Stahnke says of his series Furious Fist of the Drunken Monkey, “it just popped into my head one day and I went backwards from there; I thought it would make a cool title. I don't know much about martial arts, but the title took it from there.”

The book quickly developed a focus and an audience. “The book started out as a spoof [three years ago when the first issues were released] to make fun of trends and major patterns I was seeing emerge in popular comics, and from there the book began to flesh itself out,” Stahnke said. Indeed, the book evolved, with Chip gaining a background and a cast of hilarious supporting characters, all the while battling characters such as Gene Gnome and his homo-animals, with trusty talking toad Al.

Even the covers of the first limited series of Drunken Monkey took on a air of parody, although that initially wasn’t Stahnke’s intention, “Issue one wasn’t intended as a spoof cover, but more and more people kept telling me how much it looked like the original Star Wars movie poster. Maybe I was channeling something then! So I followed that with the next issue covers becoming deliberate spoofs.” Covers playing off of issue one of Wolverine:Origins and famous John Romita covers from The Amazing Spider-Man soon followed, and fans and critics have been pleased with his direction. “The book has been well-received, and it’s in all the local shops here in Charlotte, and any time I take it around to shows, people have responded favorably to it.”

Stahnke promised much more where the first mini-series came from, “I’m actually just finishing up on another Drunken Monkey series that should be out soon. It took a little longer because I just finished my latest series, When Drive-Ins Attack, and I’m excited about the prospects for both.”

Enthusiasm and creativity are Stahnke’s to spare, but he does admit a few challenges to being part of a growing movement of smaller publishers and writer/artist combos, “With not being a known commodity, you have to convince people to take a chance on something new. I’m selling my books for the same price that Marvel and DC are selling theirs. It’s about really telling the reader to take a risk on something they might just like.”

Stahnke plans on continuing with his plans to expand and draw more readers in. With an irreverent, well-drawn and well-written series under his belt, it’s certain that he’ll find more and more stories to add to Chip’s growing list. It’s certain that readers beyond the Charlotte, North Carolina area will continue to find him and appreciate his art, binge drinking chimp and all!