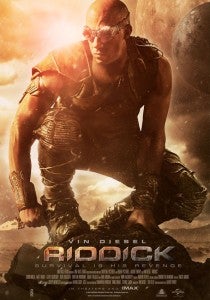 Like Man of Steel, Riddick apparently has a "motion comic" attached to it as part of the film's promotional campaign.

But whereas the Man of Steel Prequel's motion comic is only available via Wal-Mart's Ultraviolet Vudu video service and only to those who have preordered Man of Steel on Blu-Ray (although bootleg uploads exist on YouTube, of course), Riddick's is available now--free and legal. You can check it out below.

Having appeared at San Diego Comic Con International last week and teasing an apparent role with Marvel that the studio still seems pretty far from ready to announce, star Vin Diesel seems to very much have comics readers in his sights at the moment; perhaps he's hoping fans of genre entertainment can turn out in big numbers to make Riddick a surprise hit.