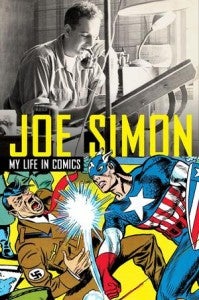 The comics industry is grieving as Joe Simon, the legendary Golden Age creator best known for co-creating Captain America, and Eduardo Barreto, the Uruguayan artist responsible for drawing The Phantom Sunday morning comic strip appearing in newspapers all over the country, both died today.

Simon, who recently published an autobiography and has been one of the most well-liked and active Golden Age creators left in comics, was 98 years old. His passing was confirmed today via a Facebook post made by his son (according to Bleeding Cool) and passed to Vanguard Productions.

In addition to Captain America, Simon was known for years of collaborations with Jack Kirby which included creating characters like Manhunter, the Newsboy Legion and many more. Before taking an editorial role at DC Comics for a while, he was responsible for hiring Stan Lee at Marvel. The impact of such a figure on the future of comics is incalculable, and it's likely that in the days and weeks to come, almost everyone will have statements to make on the matter. The first to do so were Jim Lee and Dan DiDio, DC Entertainment co-publishers, who issued brief statements via The Source.

“Joe Simon was a true legend in the comic book industry," DiDio said. "So much of what we are today is owed to him and his amazing creativity. In addition to one of the great writers of the Golden Age, he was also an editor at DC Comics. We appreciate all of his contributions to DC Comics and the industry as a whole, both on the page and behind the scenes.”

Lee added, “We lost another of the Titans this week. A creative virtuoso, Joe Simon will be best known for co-creating Captain America with legendary artist Jack Kirby but his many contributions to DC Comics, both as a writer and an editor, are legion and will continue to be cherished by longtime fans, this one included. Our sympathies go out to his family, friends and many, many fans.”

Simon has been in and out of comics for years, including a stint as Harvey Comics's Editor-in-Chief, but has always been handy for a quote when it came to Captain America. In addition to the release of his autobiography coming close to the release of Captain America: The First Avenger (and featuring a money shot of the character on its cover), he famously told the press after Captain America's 2007 death (following Marvel's Civil War event) that it was "a hell of a time for [Captain America] to go. We really need him now." 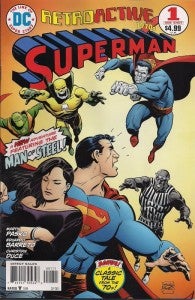 Barreto, best known for his DC work in the '80s but periodically active until earlier this year, when he drew DC RetroActive: Superman - The 70s #1, the period-piece one-shot written by Martin Pasko. He passed away due to complications arising from meningitis, which he contracted in 2010 and which drove him away from the art chores on the daily comics strip Judge Parker. In the nine months since leaving that job, he had worked on a Captain Action special with Beau Smith and most recently became the ongoing artist on the Sunday strip The Phantom.

Oni Press, who published Barreto's 2009 graphic novel Union Station with Ande Parks, released a statement about his passing, saying, "All of us at Oni Press were saddened to have learned of the passing of our friend and colleague, Eduardo Barreto. It was our absolute pleasure to have the opportunity to collaborate with this great artist. Eduardo fit the classic model of a working illustrator, and he particularly loved the wide variety of comics that he read growing up in Uruguay. He had a pronounced passion for space operas and horse operas alike, and though he made his name drawing iconic characters like Superman and the Teen Titans, his art truly shined when he was let loose to play with heroes whose abilities—and foibles—were far more human. Those who worked with him remember as a true professional, and everyone who met him could instantly call him a friend. Eduardo Barreto leaves behind a tremendous body of work, as well as a legion of fans, all of whom will miss him dearly. We join them in extending our deepest condolences to his family for their loss."