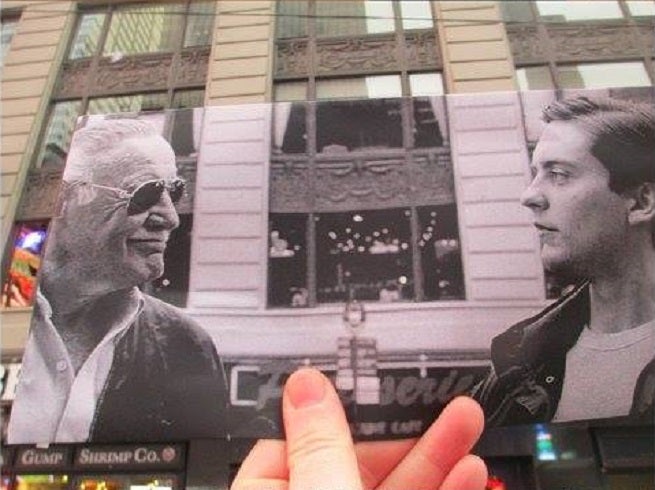 UPDATE November 5, 3:45 p.m. ET: Pretty much everything in the original piece was based on the assumption that, posted to his social media page and with no indication to the contrary, these photos were taken by Robert Downey, Jr. or at least endorsed by him. They were, in fact, taken by writer/producer Christopher Moloney and posted without attribution, presumably by Downey's social media team. The first, previous update below had indicated that they were in circulation for some time, as noted in the comments, but knowing by whom, we wanted to make sure to credit and link to him.

Thanks to CNN iReporter Henry Hanks for the heads-up.

Robert Downey, Jr. has gone on a sightseeing tour of New York City, pointing out the various places that scenes in Marvel's The Avengers and related films took place...

...and including Tobey Maguire's Spider-Man in the mix, fueling speculation by fans in the comments that those rumored talks with Sony might actually be a thing that's happening.

The full image, seen below, features someone (presumably Downey) walking around Manhattan, holding up still images from Marvel movies and finding the spots where moments from The Incredible Hulk, The Avengers and Captain America have been. In the midst of it, though: Stan Lee and Peter Parker.

There's likely nothing to this -- maybe he just wanted to use a picture of Stan, or to acknowledge the company's flagship superhero.

In fact, one of our readers points out that it may be the very definition of much ado about nothing, as these shots may not have even been created by Downey, merely shared:

Pretty sure these pictures have been doing the rounds for a while now on Pinterest and I don't think they have anything to do with RDJ. I'd love to be wrong though and it really was a tease for Spidey entering the MCU

Nevertheless...fans will take any tease they can get.