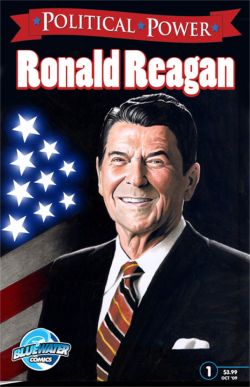 It’s been twenty-two years since Ronald Reagan last starred in his own comic book. Reagan’s Raiders was published by Solson Publication in 1987 and featured then President Reagan as a superhero leading a team of superheroes. Now, the late President Ronald Reagan is returning to comic books as the subject of an upcoming issue of Bluewater Productions’ Political Power biography comic series. Political Power: Ronald Reagan is scheduled to be released in October. The comic book will detail Ronald Reagan’s life from radio broadcaster to B-movie actor to California governor to President. The comic even covers his dignified fight against Alzheimer’s disease in his later years. Political Power: Ronald Reagan is written by Don Smith with art by Scott Woodward. The cover art is by award-winning artist Azim Akberal. "Reaganomics, the assassination attempt, "Star Wars," the air-traffic controllers strike, Iran-Contra, and, of course, the collapse of the "evil empire" Soviet Union; wherever you may fall on the political spectrum, you must agree that Reagan’s time in office has had a profound and lasting influence on the country," said Bluewater president Darren G. Davis. Writer Don Smith said "I think the crux of the book will be the assessment of whether Reagan was simply at the right place and time when the Soviet Union fell. Or was he one of the shrewdest occupants of the White House?"