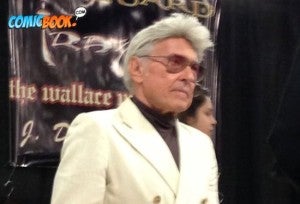 "Who in hell am I supposed to root for?" Asks legendary comics creator Jim Steranko, known for his long and acclaimed run on Nick Fury, Agent of S.H.I.E.L.D., of last night's ratings-grabbing premiere of Marvel's Agents of S.H.I.E.L.D. on ABC.

That's just one piece of a fairly solid drubbing he gave the series, which has been praised by most comics fans and creators, in a new column for The Hollywood Reporter. It's the first in a weekly series of recaps he's reportedly signed on to do and if this first week is any indication, Marvel and ABC will likely not be thrilled that this is a recurring feature.

He also said that the show had "no menace, no tension," and that while it had a good deal of potential, it is not (at least not now) actually fulfilling that promise.

"A month or so ago, during a conversation with Loeb, he categorized the series as 'S.H.I.E.L.D. meets The X-Files.' Great premise, but barely in evidence. SHIELD needs to be much tougher, much stranger, much edgier to reach its potential!" Said Steranko.

He also bemoaned the "cookie cutter" female characters and the predictable Agent Ward and his "doesn't play well with others" schtick. Perhaps most controversially, he noted (as an aside) that he felt it was a bit too pat and "P.C." to have the Hooded Hero be a black man. While he didn't explain that remark--which has led to some consternation and accusations of racism in the comments--in context it seems that Steranko's issue is that the only African-American in the cast is relegated to the guy with the hard-luck story.

What do you think? Do you agree with Steranko's take on the series or do you think this is just sour grapes because they're not doing it the way he would?