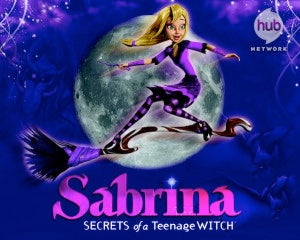 The Hub Network have released promo art and the first episode description for their upcoming new series Sabrina: Secrets of a Teenage Witch, starring Ashley Tisdale as the titular Archie Comics character. The series, which also stars Maryke Hendrikse and Tabitha St. Germain of My Little Pony: Friendship is Magic, will debut on October 12 at 12 p.m. ET on The Hub. "Dance with Werewolves" — Sabrina's witch world wreaks havoc with her human friends when Harvey puts on a cursed jacket as part of the costume he plans to wear to the premiere of a new werewolf movie. Later, Shinji crosses into the human world to seek revenge on Sabrina for standing him up at the full-moon dance, on the series premiere of "Sabrina Secrets of a Teenage Witch," Saturday, October 12 at noon ET/9 a.m. PT on the Hub Network. With My Little Pony: Friendship is Magic and Pound Puppies, the Hub have proven themselves capable of rehabbing animated properties with nostalgia value and a lot of baggage; Sabrina, last seen as a live-action series starring Melissa Joan-Hart, certainly fits that bill. Resurrecting all-ages comics character from publishers like Archie and Harvey has also proven a challenge in recent years; Casper the Friendly Ghost was recently relaunched as a comic book series from Ardden Entertainment and didn't really connect with an audience. Archie itself has been rebranding as a bit less kid-centric, with extensions of its core titles that appeal to a slightly older audience and deal with issues like gay marriage and...well, zombies.