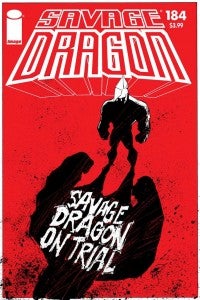 #184 hit the stands yesterday and, along with more talking than you'll get in most issues of the action-driven series, the issue features forward motion on a number of key plot points; while Dragon finds himself almost immediately under arrest and preparing to be tried for the crimes Emperor Kurr committed while in control of his body, his kids face off against enemies both super and not. Erik Larsen joined us to discuss the issue. Our usual collaborator, newly-minted editor Gavin Higginbotham, will chip in some questions later. And as always, this is a spoiler-filled commentary. If you haven't yet, buy the book and read along with us.  Russ Burlingame: I'm glad to see Malcolm reeling a bit from the big reveal last issue; there was so much going on you didn't get a lot of time to react to that. Erik Larsen: It's not always an easy task to make everything fit neatly into the allotted number of pages. Some things simply take more space to unfold. #183 ended up being a bit more cramped for space than usual but there really was no way around it. Having some scenes spill over into the next issue was necessary but I thought it worked out relatively well so...no complaints. RB: The OverLord/Powerhouse relationship goes back a ways. Can you tell us what we might expect from this particular wrinkle in the story? It seems some folks still have loyalty to Overlord. EL: There's a shared agenda there. And I'll expand on that a bit in upcoming issues. RB: Was the Smith stuff really just to ratchet up the tension on Dragon's case, or is he up to something? EL:He's doing his job. If something did go on there it could trigger a mistrial. The point of that was to give readers a clue as to what may go on. RB: After all these years, everyone still just calls him Chicken Man. Do you think that's why Powerhouse has never mellowed with age? EL: It's not helped, I'm sure. RB: You know--I wrote an article earlier this week where I compared the Emperor Kurr storyline to the Superior Spider-Man thing (villain in hero's skin/driven by his mind). Page 14 would have been really helpful in trying to put a neat, tidy bow on explaining that story. EL: I did have Angel ramble a bit on that one. RB: So...if Dragon is found guilty, isn't the death penalty just begging to start the whole process over again? 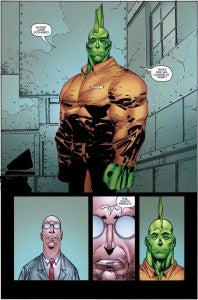 EL: Well, there is that but the reality of the situation is that these things tend to drag on for years. It's not as though they decide to execute somebody and then pull the trigger the next day. It can take decades. But yeah--if it's not done correctly--they could be in the same situation. RB: "There's no law against resurrecting somebody" is an interesting line. Given recent events, is this something they might consider trying to draft? EL: If so--it'd have to be behind the scenes. It's not a case I want to write about. RB: The bombshell Frank drops on Angel wasn't unexpected after Tierra approached Frank the way she did--but having no reaction shot in this issue was an interesting choice in terms of pacing. What drove that? EL: I think it's something of a given that she would be upset and my thought is that she would simply walk away. If anything it cemented her feelings. RB: Is Angel's reaction a bit hypocritical? I mean--it was Malcolm who put a stop to her doing the exact same thing. EL: Absolutely it's hypocritical. But people are hypocritical. People rationalize things. She can look at what DID happen and rationalize it in a way people do. A short while ago--when it was reported that something went on between Angel and Malcolm, Frank expressed some sympathy and appeared understanding--now those actions could be perceived as being manipulative or trying to make his own actions seem more reasonable. Given the fact that he acted when she was shut down--it still has to sting. 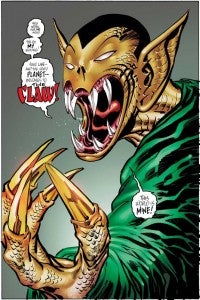 RB: Now, The Claw. There's an ugly-looking spud! In terms of just the monstrousness it reminds me a bit of the way you used to do Venom. EL: Finding a look for the Claw was a struggle. He's a classic villain that fought the Golden Age Daredevil and he's just about as offensive a racial stereotype as one can imagine. My attempt here was to push him enough into the realm of monsters so that he because more of a monster and less of an offensive racial stereotype. His design was pretty inconsistent throughout the Golden Age so I looked around for more at instances where he veered less human in order to make him look like more of a monster. It was no easy task as he looked pretty ridiculous much of the time.