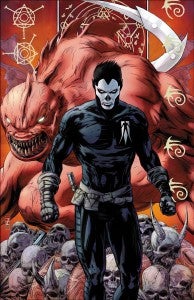 At the Valiant panel earlier today, the publishers mentioned that while there was nothing in place yet, they anticipated being able to make another major announcement at New York Comic Con this weekend. It didn't take long--Deadline is already reporting that a Shadowman film is in development. The book, which is being relaunched as a new comic book series by Justin Jordan and Patrick Zircher, will come to the big screen with comic book staple J. Michael Straczynski attached to write it. It seems as though there are more announcements to come, too--in addition to the planned Bloodshot movie that Valiant is developing at Sony, panelists earlier today seemed to hint that there might be an announcement in Quantum & Woody's future. It appeared at the time to be a comics project being teased, but given what Valiant's CEO has to say it's questionable. "Shadowman is the first in a large slate of film projects that we are developing and funding internally at Valiant," said Valiant CEO Jason Kothari. "Between Sean's evidenced track record and Joe's creative genius, we are very enthused about building a potential franchise here." "Shadowman is a character who lives in a unique world that mixes the modern world with that which is most ancient within us," said Straczynski. "The New Orleans vibe and history, and the struggle to find a balance with the personality within him, is a perfect dramatic vehicle. We've already finished the outline and there's a lot of action, much of it unique to what Shadowman can do…but at the core of it, there's a strong character, world and mythology that can be explored across multiple subsequent films. This is gonna be fun." The movie will be produced by Jason Kothari, Dinesh Shamdasani, Sean Daniel and Jason Brown, with Straczynski the executive producer.

Shadowman Movie Being Developed With Straczynski Attached to Write