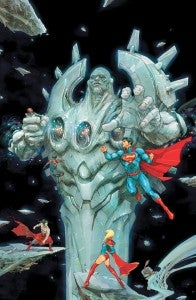 When Smallville was on the air, it wasn't lost on many fans that in a Batman-less DC Universe, the show seemed to replace Oracle (then a wheelchair-bound Barbara Gordon in the comic book source material) with Chloe Sullivan, Lois Lane's popular cousin who dated Green Arrow and provided Superman and other heroes appearing on the show with technical and logistical support from a watchtower above the city. So, of course, when Superman #17 is solicited to include "The all-new Oracle," the first thought that came to my mind (and probably many others) was whether Chloe could finally play a role in the comic books (she was teased, and introduced briefly, in the pre-relaunch DC Universe but nothing significant ever came of it). But then, the next issue solicited, the February issue of Superboy, seems to suggest that it's Oracle in name only. As H'El on Earth winds down, Superboy is "facing off against the Herald of Oracle"? Sounds more like they're building for the next big storyline, and that perhaps that giant stone monolith-looking guy in the center of the Superman cover could be our candidate, rather than a pretty girl who works with computers. Still, it's always seemed like a missed opportunity that Oracle vanished in the New 52 relaunch, particularly when DC Entertainment already owned a character who would be perfectly suited to the role in the rejuvenated DC Universe. While it appears as though this particular plot thread is a non-starter, I'm going to choose to keep hope alive. She could still appropriate the name from the destroyed villain at the end of the day. And if Krypton has to give up the name Nightwing so that he can go be a Bat-character, it seems only fair the Superman family could get a decent Oracle out of the deal.

Smallville in the New 52: Will the Comics Introduce Chloe Sullivan as Oracle?