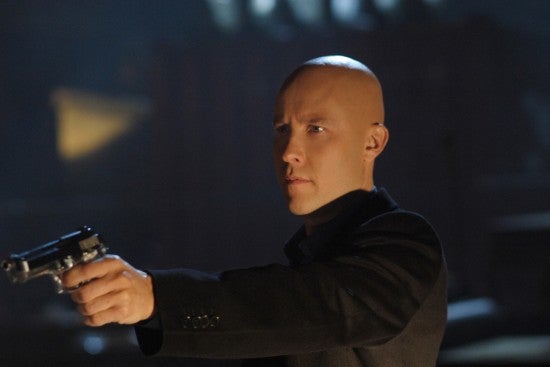 While big-screen Lex Luthors Kevin Spacey and Gene Hackman have enough Academy Awards between them to choke a camel, it's Smallville's Michael Rosenbaum who still had a lot of goodwill built up with fans and who showed up on a lot of wish lists when they were casting Batman vs. Superman.

Well, the actor says he's pretty impressed with Zack Snyder's choice for the role, and while he recently campaigned for the part on Twitter, he says he sees himself as more of a Flash-type character than Superman, Batman or even Lex these days.

"First off, I think he’s a really good actor. I don’t think he needs any advice from me, he’ll do his homework. Do it your way," Rosenbaum said of Eisenberg in a recent interview with Cinekatz. "I’m sure Zack [Snyder] has an idea. He cast you for reason. Jesse’s a good actor. He’ll do it his own way and that’s the best way. If you can do it your way, if you succeed or fail, you succeed because you are being original. If you’re trying to emulate someone, you’ll always be compared. That’s why I didn’t want to be compared during Smallville. I didn’t watch any of Gene Hackman as Lex. He’ll be fantastic. Great actor, no problem with it."

Asked whether he'd rather play Superman or Batman, he chose Door #3. "I would lean toward The Flash kind of guy. The guy who wants to take light of the situation, when everyone is so upset and the world is dying he’s like, 'Hey everything’s going to be alright! Let’s go bowling!.' That’s always been me. That’s kind of me and I’ve always had that temperance- the ability to make things better than they are. I think that’s my gift, honestly, is to entertain. I’d have to say I’d be closer to The Flash. I have some evil in me but I’d be positive for the most part."

Smallville's Michael Rosenbaum on Batman vs. Superman's Eisenberg: "He Doesn't Need Any Advice From Me"