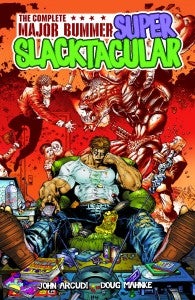 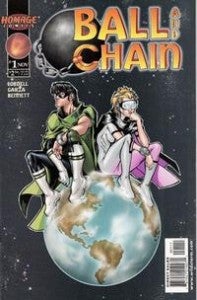 Ball & Chain – Scott Lobdell, unexpected darling of the new DC Universe, created this book years ago for WildStorm and while the comics themselves haven't seen print in years, there was at one point a TV pilot rumored so it's obvious that not everyone has forgotten the cool, fun superhero sitcom. And "superhero sitcom" might turn out to be something the DCU is missing when you consider the very serious take on the Justice League International that seems to have emerged out of Generation Lost. Challengers of the Unknown – As the de facto narrators of Mark Waid and George Perez's Brave and the Bold monthly, these characters have had a starring role more recently than most on the list...but it's been very rooted in superheroics, something that could be downplayed in a new approach that focuses on the notion of scientist-adventurers in over their head. Think Indiana Jones with ghosts, superpowered Egyptian relics and dinosaurs. DV8 – Brian Wood and the supremely underrated Rebekah Isaacs had a great DV8 story a couple of years ago that seemed to go nowhere, largely I think because not many fans remember the property fondly (it's had more bad stories than good ones, historically). Still, with that creative team and their previous mini (which had rebootish elements of its own) as a jumping-off point, it seems like it could serve as an ideal replacement in the lineup for WildStorm staple Gen 13, which is still too fresh off the latest in a series of too many relaunch attempts to be a great choice, I think. The trick? Bring in new readers, digital readers and readers who are so excited about a second wave of the DC titles that they'll try it, so that you don't have to fret over whether the previous volume sold. The Everyman Project – Run by Lex Luthor during 52, the Everyman Project gives powers to anybody who wants them. This seems an ideal side-project for the team at Project N.O.W.H.E.R.E., which apparently will be a menacing force in books like 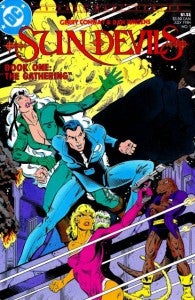 and Teen Titans. Yeah, those are bad guys...but it wouldn't be the first time that a group by shady interests banded together to use their powers against their makers and evildoers everywhere. I mean...look at the aforementioned Gen 13. Spin that a little darker, with powers and maybe looks a little odder, and you've got an X-title as told by DC. Lobo – Considering how long his last title was on the stands, and the excitement people had to see him back in 52 and the recently-defunct L.E.G.I.O.N., don't be surprised if nobody's favorite Czarnian comes back to comic shops everywhere during DC's second wave—especially if some of the "Dark" and "Edge" titles outsell something like OMAC, freeing up Keith Giffen for the gig. Sun-Devils – Yes, I'm pushing for a Sun-Devils ongoing. This 12-issue maxiseries by Gerry Conway and Dan Jurgens is to Star Wars what Kamandi is to Planet of the Apes. And while it was never established as canon during its pre-Crisis existence, characters from the story have appeared in Superman and Brave and the Bold and the team was referenced in 52 and Geoff Johns's run on Booster Gold. It's a premise that has a lot of potential, with visually interesting characters and the fact that it's set in a "future that may never come to pass" creates almost unlimited opportunities in terms of what can happen and how dire the war can get.

Some More Ideas For The New DC Universe