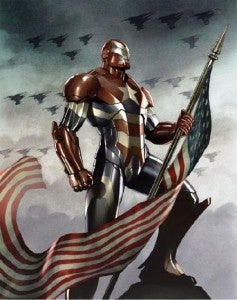 One of the biggest mysteries of Iron Man 3 has been whether Iron Patriot will play a role in the movie. Even though photographs from the first day of off-studio filming for Iron Man 3 seemed to show Iron Patriot, Latino Review later reported that it was just War Machine decked out in red, white, and blue armor.

As our readers know, Comicbook.com has been keeping a close eye on Iron Man 3 production in Wilmington, North Carolina, bringing you a number of exclusive Iron Man 3 set photos. Awhile back, a source close to production told us that Iron Patriot is part of Iron Man 3. Furthermore, the source told us that from what they observed it was not Don Cheadle wearing the Iron Patriot armor.

Our source did not have access to a script, so they were just going off what they had overheard, so we had kind of written off the information, since there were already photos and another explanation of what was going on out there. Now, a bit of new information has surfaced courtesy of the United States government that seems to once again indicate that Iron Patriot will be part of Iron Man 3.

While the new Avengers Initiative trademarks make sense given the success of the movie and Marvel’s increased expansion into online games, Iron Patriot would seem like an unusual character for Marvel to focus on protecting through multiple trademark applications. The six different Iron Patriot trademark applications cover a wide range of goods and services, everything from action figures to online services to Christmas tree ornaments.

Now, it’s not unusual for Marvel to protect their trademarks on a wide variety of goods for their major characters, but Iron Patriot is not a major character, at least not yet. For Marvel to want to pay the expensive trademark fees for all these good and services, they must be planning to put out a lot of new Iron Patriot merchandise, which is a good indication he’s going to be popping up in an upcoming summer blockbuster movie.

Now, it’s very likely that it’s not the same Iron Patriot from the comic books, but it appears as if at least the Iron Patriot name will be used in Iron Man 3. Whether it’s a new look and name for Don Cheadle’s War Machine or a brand new character is unknown.

When MTV directly quizzed Don Cheadle on if he was wearing the Iron Patriot armor, he first denied that he had been seen in the armor, saying, “I’ve never seen me in the set photos.” When MTV then continued that it had been said upstairs, Don Cheadle seemed to go along with it. However, his answer which talked about a military version of Iron Man and tension between James Rhodes and Tony Stark seems to still leave it up in the air if it’s definitely him or someone else as the Iron Patriot military version of Iron Man.