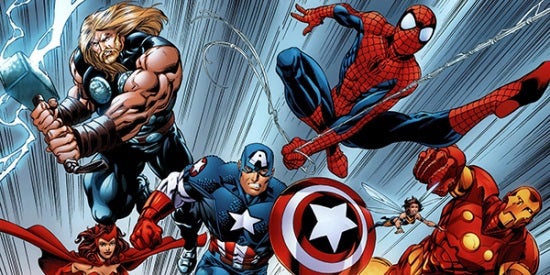 Will we ever see Spider-Man in an Avengers film? Only if the studios involved get pretty desperate, according to The Amazing Spider-Man 2 produces.

Co-Producer Matt Tolmach acknowledged the high amount of fan interest in seeing Spider-Man team up with the Avengers, but said such a crossover would be considered little more than a stunt.

“You know Avi always refers to that question as a stunt," he says. "If you were to do that, you know, Spider-Man in the Avengers is a stunt. And I get why everybody – you know, fans and audience members and movie goers – I understand it. When you think about the Sinister Six and you think about Venom and you think about Carnage and you think Spider-Man in whatever way you want in association with those movies, they feel like they're built for Spider-Man. Like that's where his story needs to go and wants to go and it has to be about more than a stunt. Stunts can be cool but it's also a business, and so the other side of the answer is they're owned by different companies. And there's a ton left in Sony's world; there's a lot of business left because there's a lot of story left. So for them to want to take this character and put it with Marvel and Disney is a huge undertaking and probably, as Avi's saying, isn't necessary until you feel like, 'Wow, we're sort of out of ideas. What should we do?' And we're far from out of ideas.”

Fans have been wanting to see Spider-Man join up with the Avengers on screen for some time, since Spider-Man was made an Avenger when Brian Michael Bendis relaunched the Avengers comic book series with New Avengers back in 2005. Unfortunately for those fans, it seems that this is just the latest of several confirmations from those working on these two separate film properties that an on-screen crossover just isn’t going to happen.

Of course, I can’t help but think of a quote from Joe Quesada, then Editor-in-Chief of Marvel Comics, about how the only way Marvel would release a crossover between the mainstream Marvel Universe’s Spider-Man and the Ultimate Marvel Universe’s Spider-Man was if Marvel had completely run out of idea. And then we got Spider-Men, which was exactly that crossover. Obviously the film crossover in question is much more complicated than that, given that we’re talking about two huge and separate film franchises belonging to two huge and separate film studios, and I, personally, wouldn’t bet on seeing it happen. But, as Quesada mentioned in his defense when Spider-Men was announced, sometimes the people in charge of these things just change their minds.

The Amazing Spider-Man 2 comes to theaters May 2.