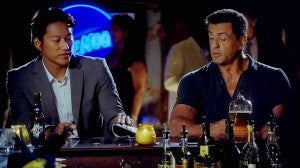 As is often the case in action films, Bullet to the Head star Sylvester Stallone plays a character that isn't entirely "good," even if he's the "good guy."

Jimmy Bobo is a hitman whose partner is killed by a group of organized criminals; when a Washington, D.C. police officer played by Sung Kang also loses his partner, his character--Taylor Kwon-- joins Stallone's Bobo on a roaring rampage of revenge.

"You can only go so far in the future and right now, we've created every kind of incredible action hero there is — there's nothing left to do," Stallone told MTV during a set visit (see video below). "So we're trying to create flesh-and-blood heroes. They're a little flawed. They're the guys you and me grew up with."

And while the trailers all feature a sequence in which Bobo kills somebody and is chastised for it by a frantic Kwon, "Sung is no saint in this either," said Christian Slater, who plays one of the film's villains. "He's very, very tough as well."

Stallone: Bullet To the Head Heroes Are "Flawed"