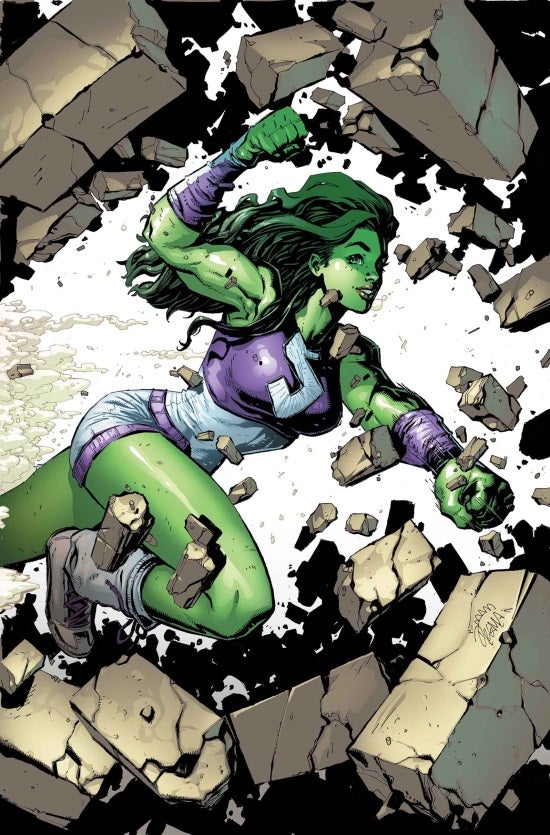 Following yesterday's controversial podcast in which Man of Steel and Blade writer David S. Goyer joked (?) that She-Hulk was "a big, green porn star," the character's co-creator Stan Lee spoke with the Washington Post to call Goyer on the carpet. "I know I was looking for a new female superhero, and the idea of an intelligent Hulk-type grabbed me," Lee told the Post's Comic Riffs. "Never for an instant did I want her as a love interest for Hulk. Only a nut would even think of that." To clarify, Goyer said that while Hulk is the typical male power fantasy, She-Hulk is an extension of that fantasy and the only woman who could handle Hulk sexually. The characters are cousins, which is one of the handful of things about his comments that has generated some heated controversy online. It isn't our reading that he actually suggested She-Hulk was created for the purpose of sexually engaging The Hulk; it seems his comment is more theoretical -- that if the reader had the powers of The Hulk, as is part of a power fantasy, Jennifer Walters would be the obvious go-to fantasy girl. That may be splitting hairs but in a rant that was already so ill-advised throwing accusations of incest probably just confuses the real issues. "As for her looking beautiful and curvy," Lee said, "show me the superheroine who isn't." Lee co-created She-Hulk in 1980 with famed Avengers artist John Buscema. The character has been in publication regularly, but not continuously, since then, including a newly-launched All-New Marvel NOW! series.

Stan Lee Blasts David Goyer's She-Hulk Comments: "Only A Nut Would Even Think Of That"

The Rocketeer: Fate of the Future Review - A Thrilling Game of Risk and Tactics With a Cinematic Flair

Is Kingpin In Hawkeye? Marvel Fans Have Questions