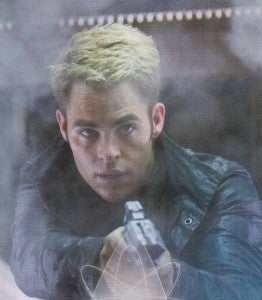 Remember how yesterday, we talked about a Star Trek fan who, faced with terminal cancer, was pleading on Reddit for an opportunity to see Star Trek Into Darkness (or at least the ten-minute preview that ran with The Hobbit: An Unexpected Journey) before he passes away?

Well, in the happy ending department, one of the fan's friends at Reddit now says that Star Trek Into Darkness director J.J. Abrams is involved and that a screening will be arranged--although it's still now clear how or exactly what.

"Thanks everyone, and a huge thanks to OP ideeyut for posting this. JJ Abrams just called Dan's wife and left a message. He's going to try to arrange a screening for Dan, either of the film or at least of the 9 minute promo reel. I'll never say anything bad about JJ Abrams again. Seriously. He is now beyond reproach as far as I'm concerned."

is set to hit movie theaters on May 17, 2013, so may not even be finished with production yet; if you remember, digital downloads to movie theaters are prompting some films to cut it awful close, with The Hobbit itself only wrapping its post production completely about two weeks before it premiered. Still, provided he can get the studio to go along with him (that's a pretty big "if"), Abrams might be able to screen a pre-VFX version for the fan, not entirely unlike the version of X-Men Origins: Wolverine that leaked prior to that movie's release a few years back. If Abrams's conversations with Conan O'Brien are to be believed, he's eager to screen more footage in general, with Paramount wanting to control the flow.

ComicBook.com was unable to reach Paramount for comment yesterday.

Star Trek Fan With Cancer Will Get His Wish, Courtesy of J.J. Abrams