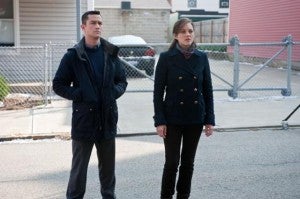 Have you noticed that it's getting harder and harder to believe what Hollywood tells us about their movies in advance?

What do you think are the odds it's just because fans ask so many more, and more insightful, question than they used to--and that the Internet puts the latest, most cogent theory right in front of anyone who's interested?

Just hours after the release of the first trailer for Star Trek Into Darkness, there are already some compelling arguments being made that the film's villain, played by Benedict Cumberbatch, is either Gary Mitchell or Khan Noonien Singh. There's also a remarkably compelling case to be made that Alice Eve's character in the film may be Elizabeth Dehner. Meanwhile, at various different times fans have been assured by  people close to the film that those actors are playing new characters original to the movie -- something that almost nobody really believes.

Those with short memories might not remember that we had a similar experience earlier this year with The Dark Knight Rises, in which two characters were actually given fake or misleading names. In the case where the name was a flat-out misdirect, the issue was addressed in-story, but in all likelihood it was really done to protect the film's twist, as it was years earlier when Batman Begins credited Liam Neeson (who played Ra's al Ghul) as "Ducard," the alias he went by, in order to preserve that character's big third-act moment.

Part of the problem, especially as it pertains to Miranda Tate, Ducard and Benedict Cumberbatch's anonymous villain in Star Trek Into Darkness, is that the villains in these films are expected to be dredged from the decades of beloved canonical stories. It always seems like something of a waste when you get a movie that doesn't use the characters' best-known antagonists, and it's an easy thing to blame if the movie goes south. How many times have you heard that Green Lantern might not have been so bad if they'd just used Sinestro as the bad guy? And that movie ACTUALLY USED characters from the source material, imagine if a movie that terrible had made bad guys up out of whole cloth.

Meanwhile, of course, there's a subcategory of fans who are always bemoaning that nobody ever creates anything original, and that the "new" versions of their old favorites are never as good.

Where do you fall?

Star Trek Into Darkness, The Dark Knight Rises and the Problem With Original Characters