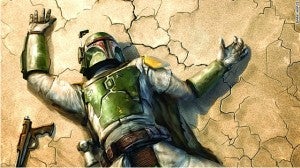 Jeremy Bulloch, the actor who played Boba Fett in the original Star Wars trilogy, wants to see the iconic bounty hunter return for Disney's next round of sequels--and while he's pretty sure they wouldn't cast him in the part if they did, he'd still like to make a brief appearance in the films.

"It would be lovely to see Boba Fett back!" Bulloch told Unleash the Fanboy. "The technology now exists to make his jet pack even more realistic and exciting. I'm sure if Boba Fett were to return they would go with someone younger, but I’m still fit and can jump around. I’d love to be involved in some way, maybe a cameo as an ageing Bounty Hunter in the corner somewhere."

Boba Fett, one of the most popular characters from the original trilogy, was brought back for the prequel trilogy as well, appearing as a child whose "father," Jango Fett, was the soldier from which both his "son" and thousands of Republic Army soldiers were cloned.

Boba Fett died in Return of the Jedi but has lived on in dozens of stories from the Star Wars Expanded Universe and, being a clone, is somewhat more easily replaced than most other characters. Recently, he appeared in the Dark Horse miniseries Star Wars: Boba Fett is Dead.