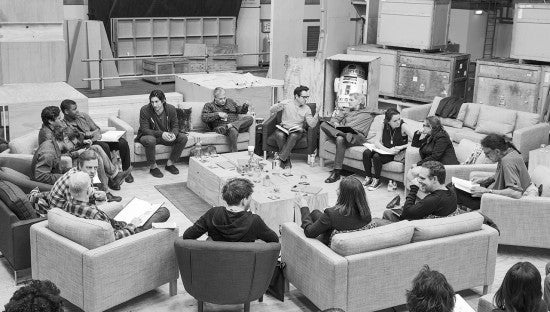 With the release of the above cast photo for Star Wars Episode VII, most fans are exuberant just to see their favorite characters back in the mix again, hanging out with some new, young talent that's bound to be the next generation of Star Wars actors.

Well, unless your favorite character happens to be Lando Calrissian.

The character, played in The Empire Strikes Back and Return of the Jedi by Billy Dee Williams, does not appear in the image above and was not named in the statement by director J.J. Abrams. 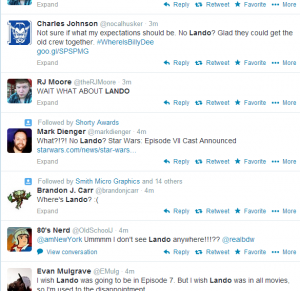 There is one non-white face in the crowd: Attack the Block's John Boyega, who has frequently been tied to Marvel's Black Panther for Disney. Immediately, some fans on social media have jumped to the conclusion that he is Lando's son, although there have been persistent rumors that there would be a black or otherwise non-white Kenobi included in the film, so that hardly seems like a given.

Of course, Lando Calrissian didn't appear in Star Wars in 1977. There's a chance the character could be brought in during Star Wars Episode VIII in a kind of mirroring strategy to the original trilogy. That would mesh with at least one theory we've heard before -- that the film will take the Rocky Balboa approach of structuring its story very closely to the first film and making the primary differences revolve around characters and setting.

In any event, a quick look at Twitter (there's a screen grab on the left because it was refreshing too quickly to take a meaningful sample by copying and pasting actual tweets) would indicate that many fans feel pretty strongly about his exclusion.

Still others are noting more generally that even after a lot of talk about a more diverse Star Wars, everyone's favorite galaxy far, far away still skews very heavily white and male.