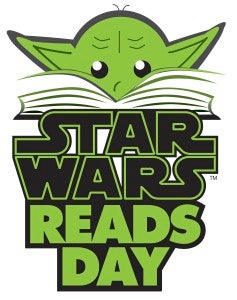 Last year, 30 authors and 1,500 costumed volunteers participated in over 1,200 Star Wars Reads Day events across North America. On October 5 of this year, Star Wars fans, authors, and artists will again come together in this multi-publisher initiative that celebrates reading and Star Wars.

“Star Wars Reads Day is the kind of initiative that we at Lucasfilm love to support” says Carol Roeder, Director of Publishing at Lucasfilm. “Reading and Star Wars have gone hand-in-hand since 1976, when the novelization of the original Star Wars movie was released. Over the years, many fans have discovered the joy in reading through Star Wars books, and we hope to continue encouraging more people to read.”

Dark Horse Comics, who have published Star Wars comics for many years, are helping to promote the event.