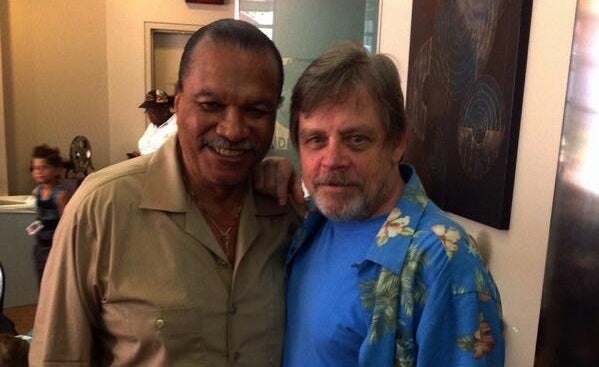 A Star Wars reunion of sorts is taking place at Disney's Star Wars Weekend. Mark Hamill has posted a photo of himself with his The Empire Strikes Back and Return of the Jedi co-star Billy Dee Williams to his Twitter account.

THe 62-year-old Hamill remarks in his post that the 77-year-old Williams looks younger than he does. Hamill made his first appearance at a Star Wars Weekend this week, where he and Williams were both guests of honor.

Hamill is one of the original trilogy cast members returning for Star Wars Episode VII. Williams was not named as a returning cast member. You have to wonder if that made for some awkward conversation.

How does he look younger than me??? It's not fair! @realbdw #SWW2014 #StarWarsWeekends #DisneyWorld pic.twitter.com/czPG3N7pTq