Did you ever wonder what Star Wars would be like if it were written by Kevin Smith, directed by David Lynch and starred James Franco? How about if it were written by Charlie Kaufman, directed by Michael Bay and starred Philip Seymour Hoffman? With Star Wars: The Sequel Debacle Simulatron, you can put together dozens of permutations of talent (and lack thereof), creating what you consider to be the perfect Star Wars film...or the perfect recipe for disaster...and the game will spit out a report telling you what its programmers think would be the most likely outcome for your movie. You can also pick the "blend" of action, epic science fiction, romance and comedy that your film would have. Of course, as much tongue-in-cheek fun as it is, it's hard to imagine that the simulator actually has any bearing on what you put into it. 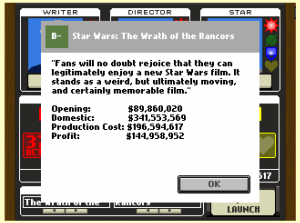 The screen grab above, for example, is the result of a film called Wrath of the Rancors. Written by David Lynch, the film is directed by Steven Spielberg and stars Joseph Gordon-Levitt. We gave the movie 10% romance, 15% comedy, and split the rest evenly among action and epic sci-fi. What's the result? "The film spends a disappointing amout of time propping up a romantic B-plot that goes nowhere. The film practically oozes smugness and money." Of course, if you refresh your web browser... "Fans will no doubt rejoice that they can legitimately enjoy a new Star Wars film. It stands as a weird, but ultimately moving, and certainly memorable film." Okay, so both the smugness and the "weird but ultimately moving" stuff could apply to David Lynch's work...so maybe it's not entirely random. It's a step above those "love calculator" websites that used to distract the cheerleaders when I was in high school, in any case, and a lot more fun to mix and match.

Jujutsu Kaisen Reveals One of the Culling Game's Bloodiest Moments Yet

Krispy Kreme: How to Get Free Doughnuts Today

The Witcher Season 3 May Have Cast "False Ciri"