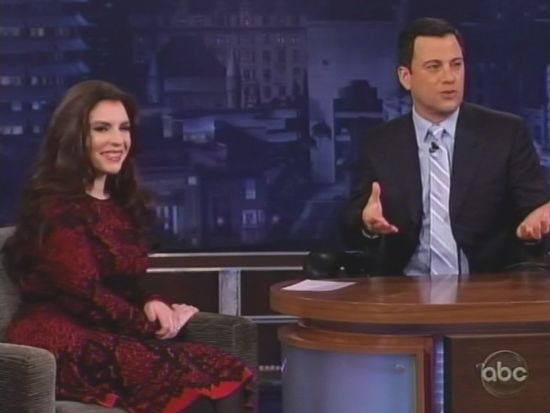 On tonight’s Jimmy Kimmel Live, Stephanie Myer, who is the author of the Twilight series of the books, was a guest. The Twilight Saga: Breaking Dawn – Part 2 is set to open in theaters on November 16, 2012.

Kimmel quizzed Stephanie Myer on how she got started with the Twilight books. Myer revealed that she had a dream about a girl who fell in love with a vampire, and she wrote it down, but it was her sister who encouraged her to send it to publishers. When Kimmel asked her if she rewarded her sister, Stephanie Myer said, “She gets to read everything first.” But Kimmel said that wasn’t enough, and she should buy her sister a boat or something like that.

When Kimmel asked if she would be open to Twilight being rebooted in ten years, Stephanie Myer said, “I’m sure it’s possible that they might start over. As to if I would support it, I think it would depend a lot on what they are doing exactly.”

When Kimmel followed up and asked how she controlled Hollywood ruining what she had written, Stephanie Myer said, “You can’t usually. I mean I got really lucky. There was an early script before I was with Summit that did go a little bit off of the page. You know, with the speed boats and the night vision goggles and Bella has got a gun.”

When Kimmel asked if she would write any more books in this vein, Stephanie Myer said, “I am on to other things. I never say absolutely not, just because I don’t want someone to call me a liar in ten years if I change my mind.”