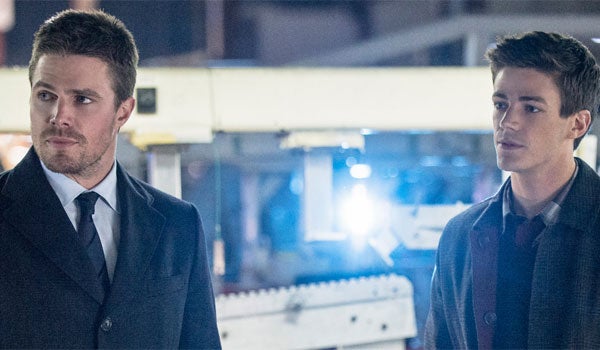 Besides teasing who might appear on the upcoming third season of Arrow, star Stephen Amell at Phoenix Comic Con this weekend addressed the always-looming question of whether he and The Flash star Grant Gustin could appear in the forthcoming, Zack Snyder-directed Justice League movie.

"The guy that I train with at Tempest was actually just up there shooting Batman V Superman and he told me secrets," teased Amell.

To the question itself, he said, "You know what? I don't know. I think the people that watched the Flash pilot that have seen it and saw the scene where Grant and I interact -- and he's not even in his costume -- a lot of people were like, 'that feels like the Justice League.' And I thought it felt like the Justice League, too. I don't know if we'll eventually cross over into the movies but that being said, we don't need to. The important part is that Arrow and The Flash are able to stand on their own and be appreciated for what they are and the medium that they are in."

He added, "If they wanted me to be in the Justice League movie and it worked out, that would certainly be something that I would be interested in. That being said, my most important and crucial priority is making [Arrow] Season Three better than Season Two."

He had earlier said that if he could have his cousin Robbie Amell appear as Bruce Wayne on the series, that he pictured it as a quick "Hey Bruce, how are you?" kind of thing, not with Robbie in the batsuit, and that he was reasonably sure that he could convince his cousin to do such a cameo for free.