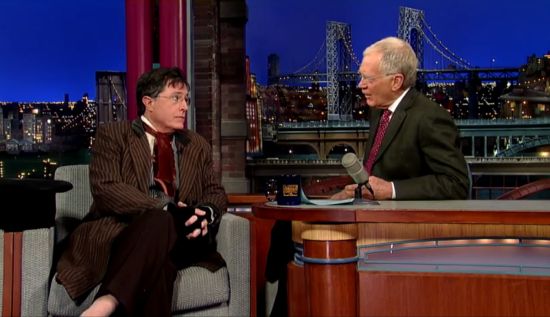 On Monday night's Late Show with David Letterman, Stephen Colbert dropped by wearing a fake mustache and a top hat. During his chat with Letterman, Colbert revealed that he has a cameo in The Hobbit: The Desolation of Smaug.

"I'm kind of the breakout star of The Hobbit, Dave," said Colbert. "I don't want to tell anybody where I am, but I'm in it. I"m in this next one coming up."

When Letterman asked Colbert if he could prove it, Colbert responded, "Check IMDB. I'm in there. It says Stephen Colbert is in the movie. If it's on the Internet, Dave, it's true."

"I and my wife and my two boys were invited down to New Zealand to play around with the folks in The Hobbit by Peter Jackson," continued Colbert. "We went down there, and we're in a scene in Lake-town. I don't want to say where in the movie. It's kind of a Where's Waldo."

The Hobbit: The Desolation of Smaug is set to be released in movie theaters on December 13, 2013.

Stephen Colbert Reveals Cameo In The Hobbit: The Desolation Of Smaug