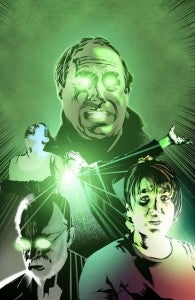 The series, titled The Little Green God of Agony, went live on October 15 and will update thrice weekly--on Mondays, Wednesdays and Fridays--for eight weeks. It revolves around Katherine "Kat" MacDonald, an RN hired to care for a wealthy client named Andrew Newsome who has gone from doctor to doctor trying to find a quick cure for his lingering pain, to no avail. Kat is convinced that he would overcome the injuries he sustained in an airplane crash but he is unwilling to endure the pain of physical therapy. In desperation, Newsome has hired a healer, Reverend Rideout, who promises to "expel" his pain.

The comic is an adaptation of a story by King which has already appeared in Stephen Jones’s 2011 anthology A Book of Horrors, and in Ellen Datlow’s The Best Horror of the Year, Volume Four.

“I have been a huge Stephen King fan for as long as I can remember,” said Calero in an announcement from New York Comic Con this weekend.  “To be able to work on ANYTHING with him is an honor."

King himself is no stranger to comics; he once wrote a Batman story for one of Detective Comics's anniversary issues, and a number of his novels have been adapted into books from Marvel Comics. King and his son Joe Hill have also written comics both together and separately for creator-owned titles, and King co-created American Vampire with Batman writer Scott Snyder.