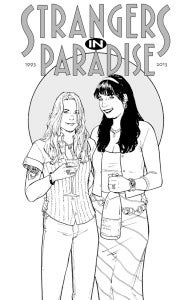 Another thing that isn't coming just when he'd hoped? The Strangers in Paradise prose novel announced last year at his Comic Con panel.

A story shrouded in mystery, Moore's novel is set to pick up on the lives of Francine Peters and Katina Choovanski, last seen in the final issue of Moore's long-running indie series.

Moore says, though, that the novel took on a life of its own and that he had to back-burner the project to keep everything else he has going on right now from falling behind.

"I don't want to talk about it too much because I don't want to put the jinx on it. I was working on it and realized that I would have to totally dedicate myself to it in order to get ready for this year and I just couldn't do it because I had to get the omnibus ready and then the treasury ready and the color book and then keep Rachel Rising in line so I put it off on the back shelf until I get past the convention season and get the Strangers in Paradise Treasury Edition out," Moore told ComicBook.com. "When I go home, I can't start it; I have to start on the Treasury and that will take me a couple of months to finish that out and get that out in the fall so hopefully in the off-season (you know, it's so strange to think we have an off-season), I'll go back to it and try like hell to have it for 2014."

Strangers in Paradise Prose Novel Pushed Back to 2014