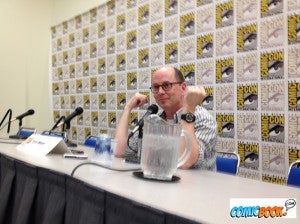 At his only U.S. convention appearance today at the San Diego Comic-Con International, Terry Moore announced that his indie comics favorite Strangers in Paradise will return as a prose novel in 2013, offering fans a "deeper, introspective look" into the lives of Katchoo and Francine.

Moore, who says he'll be working on the novel this winter, intends to have the book ready for Strangers in Paradise's twentieth anniversary in 2013.

"I'm approaching sixty," Moore told an audience in Room 23ABC at the San Diego Convention Center, "and I doni't want to be 65 with a monthly deadline for art pages, but I can be 75 and still writing."

Moore said that he wanted to write the characters in a novel because it would allow him to have a "more mature level" of storytelling than is generally accepted at comic shops, where your book has to be shelved next to all-ages titles and superhero stories. What he meant by that is unclear, but it's worth noting that in a San Diego Comic-Con International-exclusive print that went on sale yesterday, Katchoo appears to be wearing a wedding ring.

He also said that fans can probably expect an appearance by a familiar face from Strangers in Paradise appearing in his current, horror comic Rachel Rising in the next year.

Check back later for full coverage of the Terry Moore panel and much more from Comic Con International.

Strangers in Paradise to Return as a Prose Novel in 2013