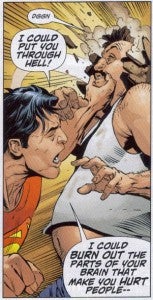 Be warned that spoilers follow, but this comic has been out since Wednesday, so most fans that bought it have probably read it by now. It's interesting that this issue hasn't generated a lot of news coverage yet, because it contains a major change in the life of Superman. In Action Comics #10, Superman abandons his Clark Kent identity. He not only abandons it, but he allows the world to believe that Clark Kent is dead. In general, Action Comics #10 is probably one of the most unusual but also one of the most fascinating Superman comic books ever written. Grant Morrison has definitely crafted an interesting take on the Man of Steel. Early on in the story, Superman threatens to give a child killer a heat vision lobotomy. Of course, Superman doesn't carry out his threat, and instead he tells the murderer that h 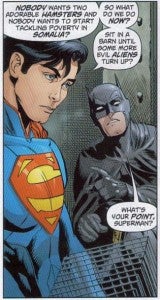 e'll let his "own kind" deal with him. The heat vision lobotomy scene is followed by Superman asking his fellow Justice League members if any of them would be willing to look after the murderer's two pet hamsters. Superman actually asks his fellow League members, "Nobody wants two adorable hamsters and nobody wants to start tackling poverty in Somalia?" Of course, what this is building up to is that Superman sees a world in need of change, fairness, and justice. He thinks the Justice League should be addressing the world's problems instead of just fighting space monsters. Eventually this leads to Superman abandoning his Clark Kent identity. When Clark Kent gets caught up in an explosion, Superman allows the world to think Clark Kent is dead. The backup story actually focuses on Clark's friends like Jimmy Olsen and Lois Lane getting together in honor of his memory. It also looks like Clark Kent might not be returning any time soon, as the Action Comics #11 is supposed to reveal Superman's new secret ident 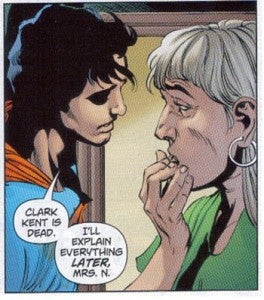 ity. Of course, Action Comics takes place about five years in the past, so we know from the Superman comic that is set in the present that the Clark Kent identity will return. However, the death of Clark Kent is still a huge twist in the Superman story. A twist that you would think would have media outlets screaming, but perhaps everyone has been to preoccupied with the Green Lantern news of the week.