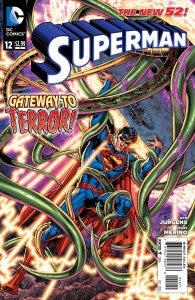 This month's column is an interesting one for me; as a young teen, I rediscovered my childhood love of comics through Dan Jurgens's Superman--a title that would stick with me until I was 19 and interning at Wizard Magazine, during which time I both spoke with Dan for the first time, and reported on the folks who would take over after he and his collaborators left. To this day, many of my favorite superhero stories come from that run, which defines Superman for me and has not, in my opinion, been paralleled since. Having something of a front-row seat to Dan's second time around on the Man of Steel has been fascinating, informative and a distinct pleasure, and while I'll follow his work to The Fury of Firestorm the Nuclear Man (which he will begin writing and drawing along with inker Ray McCarthy, who did Superman #12, with October's #13), there's still nothing quite like a Dan Jurgens Superman story. I've really enjoyed the last six issues, and been excited to have the opportunity to speak with my childhood hero about them without having to softball the questions; great work is the best friend of a reviewer who's trying to stay on speaking terms with the artist. I like to think we've given some color commentary and context for what he, Keith Giffen, Jesus Merino and the other talented collaborators and editors working on the title have been trying to accomplish. And while their team is moving off Superman, to be replaced next month by Scott Lobdell and Kenneth Rocafort, I've been impressed by the work they've done these last six months and the sense of stability they've brought to the table in spite of what are now some pretty well-publicized challenges faced by the book following the departure of Dan's predecessor George Perez. 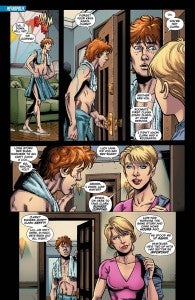 Enjoy this final commentary on Superman #12, thanks for reading, and if there's anything I haven't asked, feel free to e-mail us, tweet at me or reach out on our Facebook page and I'll see if I can't incorporate it into a future conversation. The first thing, of course, has to be that DC announced this Wonder Woman thing on th esame day your issue came out, and Clark had a date. Was that a little awkward? Not at all. I had finished work on Superman a few months ago so it was definitely in my rearview mirror. In addition, Clark had one date with Lucy. We never said it meant "exclusive", and the WW thing had been in the works for quite awhile. Have you been "in on" the plan from DC in terms of a Wonder Woman relationship? When I was writing the book it was in the background, nothing we had to deal with yet. Is that a Warners thing or a writers' thing, do you think? Geoff is not averse to formalizing his old fan desires (see the Superboy-Lex thing he did in Teen Titans), and a great many fans want to see those two together. The answer could be "all of the above". Ideas and plans often emerge from multiple discussions involving multiple people. That's certainly possible here. 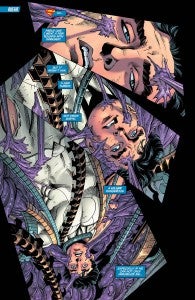 Was there a little bit of a nod here to Jimmy and Lucy's past together, or is that just my imagination? They had a thing before she was with Ron Troupe in the Old Days. Jimmy and Lucy go way, way back-- long before I ever even worked in comics. So, yeah, it was done with a wink and a nod. Have you seen the digital edition of this issue? The guided view on ComiXology is very effective in the sequence where Superman is coming back to consciousness. No! I'll have to check it out! We're trying to tailor some of that to get it to work, but it's a new endeavor. Still figuring it out so I'm glad to hear it worked well. Everybody had the same reaction that I did--that there's some Predator similarities in the design here. But was that on purpose? Not overtly-- more in terms of atmosphere. Can I just pretend like this is the New 52 redesign of the Sauroids from Sun Devils? You know, for me? 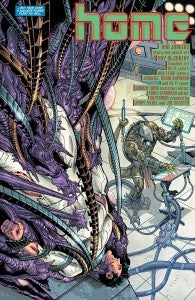 If those who remember it want to do so, knock yourselves out! Ray McCarthy is going to be your new inker on Fury of Firestorm. Is this the first time you've worked with him, though? No. Ray did some work on Green Arrow a few months ago. Plus, we know each other from way back in the "Superman, Era 1" days, though he wasn't inking me at the time. It's a very different approach to your work than Jesus'. More confident lines, but a bit less fluid. There's more of a Romita feel. Do you think that's fair? Yeah, I think so. Jesus also brought a little more texture to the work. Ray is more streamlined. Both guys are very good and very effective. You think that'll work particularly well with a character like Firestorm, whose best days were at a time when that was one of the major styles of choice? The Firestorm stuff is looking GREAT. Ray is definitely strutting his stuff on the book. We're really happy with the way it's going. 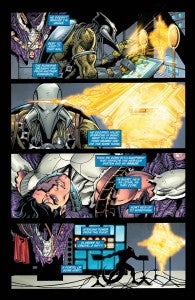 Superman refers to his new costume as "armor" here. I don't know if I've seen that used officially in print. Was that a discussion you had with editorial at some point, in terms of the terminology? I don't think of it as "armor" in the traditional sense of metallic armor. He could just as easily call it a battle suit or costume. I wouldn't take the term too literally. This is an interesting spin on the old "he's just trying to get home and we're persecuting him" trope that you get in things like E.T. and Starman (the John Carpenter version, not DC's). Having him be not only a mass murderer but one who has no conception of what he's done wrong is an interesting hitch to it. Yeah, it would have been nice to be able to expand on that, but I had to wind it up with #12. And Superman, in the end, kind of decides "it's probably better he got away." Is that a segment of dialogue you have to write carefully to make sure he's not coming off as too callous? We were careful because Superman does believe in justice. At the same time, how would justice be served here? What court tries him? What prison does he get sent to? If he sees nothing wrong with what he did, particularly since he was brought here against his will, what is the proper solution? 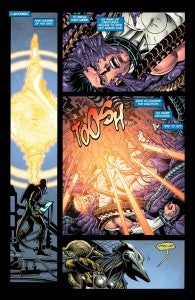 Had you stuck around on the title for a while, is Ivan a character you'd have liked to come back to? Absolutely. Obviously there's a use for a guy with nuclear connections in Firestorm. Might we see you picking up on the Russian threads over there down the road? I'd like to, though we the opportunity has to be natural. It can't be forced. So, the suit does indeed regenerate. Is that something that'll help with the old issue that DC never particularly liked seeing Superman's costume in tatters? I don't know about now, but I do know that back in the day, when we ripped up Superman's costume, everyone loved it. We were encouraged to do more. After all, one of Superman's most famous covers is built around the idea of the torn cape. I think you know which one I'm talkin' 'bout! In spite of a somewhat larger scope and the fact that the good guy is winning--both of which seem to open it up a little bit--this fight scene is kind of an echo of last issue's, in terms of being quick and brutal. As a two-part story, basically, was that a structural thing? I don't know that I'd agree about it being similar. Superman was taken by complete surprise in the first chapter, whereas he hit back hard and fast this time, without giving the alien a chance to react. The structural aspect was the "turn the table" idea. Is there anything special about the font that the creature used for most of the issue? I seem to remember that there was a uniform font DC was using for "alien languages" in the first few months of the New 52. No, this was just what we decided to go with. Is there something subtly political about this idea of a character who's in enemy territory and says, essentially, "Your laws don't apply to me"?  I think it applies here. As I said, especially since he was brought here against his will. Is the tentacle monster a bio-weapon or something, or is it just a matter of a number of different species in the other dimension? Another species. It's interesting--you got that great splash page of Superman in front of the Daily Planet building this issue, and also the last page of Clark and Lucy bungee jumping. Do you think you're the only artist ever to get splash pages of both Supes and Clark flying in the same issue? There was a conscious "match" there, right down to the similar poses. Thematically, it accomplished a certain feel I wanted to convey. Any last thoughts on leaving Superman? I mean, you were only here for an arc, but there are very few working artists more closely associated with the character than you are, so it feels somewhat bigger than that. Or is that just the readers? This is one of those times when everyone had the best of intentions, but the goals simply didn't line up.