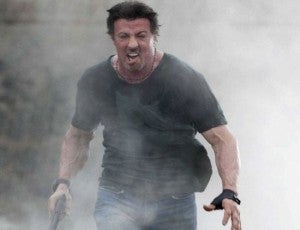 Update & Correction: We just heard from a publicist for Expendables 3 that there is zero truth to the below Bulgarian news story about the wild boar attack on Sylvester Stallone, so it looks like Expendables 3 has actually been wild boar-free.

In breaking news out of Bulgaria, ManlyMovie.net has a story that the Bulgarian news site Svejo.net is reporting that Sylvester Stallone was attacked by a pack of wild boar on the set of The Expendables 3. In what should come as a big relief to everyone, no wild boar were injured in the attack.

According to the report, Sylvester Stallone and some of the cast were scouting filming locations for future scenes, when a group of wild boar came charging out of the forest. Apparently, the wild boar were able to sense that Stallone was the alpha male of the group (no we’re not making this up, that’s what is being reported), so they made a b-line straight for him.

Now, most would probably expect the next part of the story to involve Stallone killing the beasts with his bare hands, but it seems that Stallone and the rest of the crew elected to hide in the trailers until the ambush was over.

The Expendables 3 is set to be released in movie theaters on August 15, 2014.