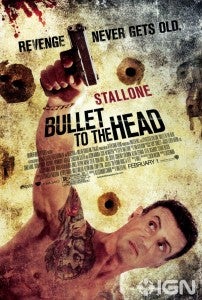 Sylvester Stallone can sure hold a pose, as evidenced by another new poster released in advance of next week's release of his Walter Hill-directed comic book adaptation Bullet to the Head. It's the same pose as just about every other poster for this film, as well as the cover of the Judge Dredd DVD from almost 20 years ago.

He's a bit more flexible in a newly-released clip, though, as he ducks and rolls and barrels through doors.

The film, due out on February 1, stars Stallone as a hitman who teams with a young New York City detective in a high-stakes investigation that leads from dingy back alleys all the way to the power corridors of New Orleans. The unlikely duo, brought together by two vicious murders, take on all who stand in their way, willing to sacrifice everything to exact revenge.

Check out the newly-released clip of Stallone and Momoa getting a little more...up close and personal...than you'd generally like in a restaurant men's room.

I mean they're fighting! Geez, you people need to get your minds out of the gutter.

My Hero Academia Cliffhanger Stuns With a Major Hero's Return