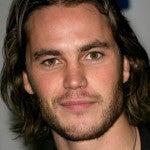 Taylor Kitsch's career keeps rocketing up and up. This time, it looks like he's headed to Mars. According to THR, Kitsch has landed the title role in 'John Carter of Mars', which is based off the Edgar Rice Burroughs book. The Canadian actor, who played Gambit in the recent 'X-Men Origins: Wolverine', will reunite with another fellow 'Wolverine' cast member: Lynn Collins. 'John Carter of Mars' centers on a Civil War Veteran that dies and is mysteriously transported to Mars. On Mars, he takes a prominent role in a battle of humaniods and aliens. Andrew Stanton (WALL-E) of Pixar will direct. There is talk of a possible trilogy, but that has not been confirmed. Production will begin in early 2010.

Taylor Kitsch to Star in 'John Carter of Mars'