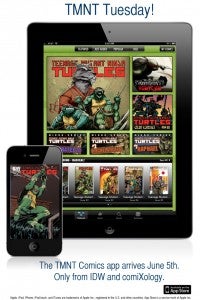 Earlier today, IDW Publshing and Nickelodeon announced the release of a new iOS app centered around Teenage Mutant Ninja Turtles comics. Currently, IDW publishes an ongoing monthly comic book based on the popular and long-running licensed property while Nickelodeon holds the rights to the property itself. The app, which will be exclusive to Apple devices, allows fans to access new comics and select older microseries, one-shots and even some of the old black-and-white Eastman and Laird material.  The current IDW series boasts co-creator Kevin Eastman among its roster of creators. The announcement was scheduled to coincide with a smaller announcement that Teenage Mutant Ninja Turtles comics would be made available thorugh the IDW and ComiXology apps, which can be accessed on a variety of non-Apple formats. "We're thrilled to be continuing our partnership with IDW; their expertise in comic book development is unsurpassed," said Paula Allen, SVP Global Publishing, Nickelodeon Consumer Products in a statement. "We're very excited to have our comics available to Teenage Mutant Ninja Turtles fans digitally via this new app." IDW CEO and Publisher Ted Adams was equally enthusiastic, saying, "IDW is very excited to launch this series. Fans have been demanding to read IDW's TMNT collection digitally since IDW published the first issue. This is an excellent way for people to catch up on the entire series."

Star Trek: Picard Showrunner Wants Season 3 to Be a Continuation of Next Generation, Reveals Approach to Canon