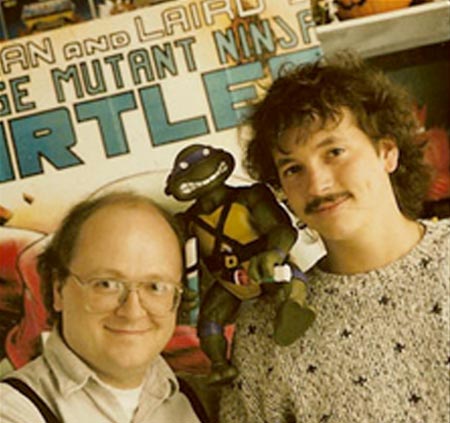 Kevin Eastman and Peter Laird, co-creators of Teenage Mutant Ninja Turtles, will celebrate this year's Free Comic Book Day by making their first public appearance in 20 years. Free Comic Book Day happens to fall just one day before the 30th anniversary of Teenage Mutant Ninja Turtles #1 convention premiere. That, combined with the upcoming Teenage Mutant Ninja Turtles film, seems to make Free Comic Book Day 2014 the perfect day for Eastman and Laird to hold their public reunion. The reunion will take place at Jetpack Comics' Free Comic Book Day Festival 2014. Kevin Eastman appeared at the celebration last year and enjoyed it so much he decided to take Peter Laird back with him this year. "I've known Peter and Kevin for over 30 years now but I never in my wildest dreams thought this would actually come to pass", said Ralph DiBernardo, owner of Jetpack Comics.  "Even when Kevin mentioned it I never gave it another thought.  Now that it is happening I can barely believe it.  I was there when it all started in 1984 and now I get to be there for their reunion". DiBernardo was the organizer/promoter of the small convention where the Teenage Mutant Ninja Turtles premiered in 1984.  Thanks to Eastman, Jetpack Comics will be giving away a limited edition mini-print of the original convention poster designed and executed by Eastman and Laird, as well as a print of the first rendition of the Turtles. Working with Mirage Studios creator and Shellback Artwork owner Steve Lavigne, Eastman reached out to Laird and suggested they get back together in celebration of the Turtles' 30th anniversary.  With little persuasion, Laird agreed. "Everything just came together perfectly.  Laird has a home in the area and signs at Lavigne's shop with other Mirage creators a few times a year.  Eastman often returns to New England to visit family & friends.  Jetpack Comics is just lucky enough to be in the middle of it all and I am just lucky enough to be friends with each of them", said DiBernardo. For the official 30th anniversary, Sunday May 4th, Eastman and Laird will be signing at Lavigne's Shellback Artworks in Wells, Maine.  Along with Eastman and Laird, additional Mirage Studios creators (including Steve Lavigne and others) will be on hand for the Rochester, NH signing and the Wells, Maine event. The Rochester, NH Free Comic Book Day Festival may well be the largest FCBD event in the country (perhaps the world) spreading out over nearly 2 square miles with thousands upon thousands of visitors for the event.  Additional creators at the Rochester, NH Free Comic Book Day Festival include Rebekah Isaacs (Buffy The Vampire Slayer Season 10 illustrator), Christopher Golden, Tom Sniegoski, Jason Ciaramella (Joe Hill's The Cape creator), Rich Woodall (Dark Horse Comics Presents Kyra co-creator), Matt Talbot, Brandon Barrows, Tyler James (publisher of Comix Tribe Comics) & plenty more.  The Rochester, NH Free Comic Book Day is organized by Jetpack Comics LLC and made possible by The Rochester Main Street Program. Shellback Artworks is New England's premiere Teenage Mutant Ninja Turtles museum / art gallery / comic shop / art lesson institution, owned by Mirage Studios creator, Steve Lavigne.