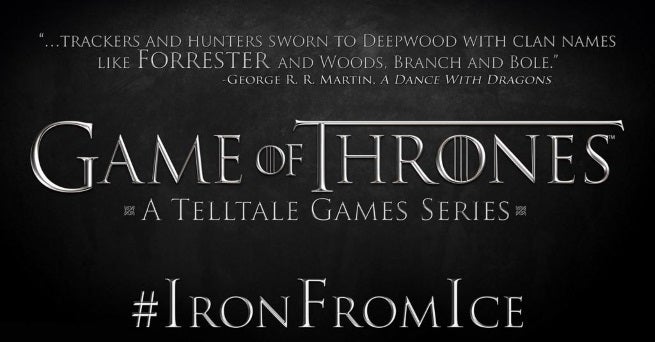 Telltale games has released a tease for their upcoming Game of Thrones adventure game that may hint at the setting and characters involved.

The teaser image features quoted text from A Dance with Dragons, the fifth installment of George R.R. Martin’s A Song of Ice and Fire Series. The excerpt reads, “"...Trackers and hunters sworn to Deepwood with clan names such as Forrester and Woods, Branch and Bole."

"...with clan names like FORRESTER" #GameOfThrones: A @TelltaleGames Series Based on the @HBO Series #IronFromIce pic.twitter.com/Bm99n7qaie

The emphasis is placed on the name Forrester, both in the image and in the status included with Telltale’s tweet. House Forrester is a Northern house, sworn to House Glover of Deepwood Motte. They reside in the wolfswood, a large forest, and Asha Greyjoy (Yara in Game of Thrones) thinks of them more as a clan than a noble house.

Not much else is known of the Forresters. Lady Sybelle Glover provides some Forrester scouts to Lord Stannis Baratheon to aid him in travelling through the wolfswood to get to Winterfell, but there have been no significant individuals from House Forrester in the series so far – which may make one a perfect protagonist for Telltale’s video game series.

The status update also includes the hashtag #IronFromIce. The exact meaning of the hashtag is unclear. Most likely, it is the name or subtitle of the Telltale Games series.

Telltale Game, who is best known for their award-winning episodic game series based on The Walking Dead, announced last year that it would be creating a similar style game based on Game of Thrones in 2014. No official release date has been announced.