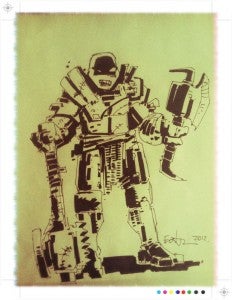 They may no longer be teen-aged or mutants, but Kevin Eastman and Peter Laird's Ninja Turtles are still headed (ever-so-slowly) to a theater near you soon. And when they arrive, according to Eastman, the film will draw influences from recent successes like The Raid: Redemption, Rise of the Apes and Marvel's The Avengers.

“All the intentions are in the right place,” the artist, who still works with IDW on their Teenage Mutant Ninja Turtles comic books, told NBC Chicago. “I couldn’t be happier to be a part of it. I think it’s going to be a fantastic film.”

Eastman also said that the film, which is set to be produced by Bay and directed by Wrath of the Titans director Jonathan Liebesman, has been in progress for quite a while, but that the time it's taken apparently hasn't dulled enthusiasm for the film.

“Three years ago, I started working on the John Fusco version, which was this awesome, awesome, awesome Batman Begins kind of take on the first movie. It was really interesting, but it was maybe a little too edgy for what Paramount wanted. It went through a couple of different versions before Michael Bay took it over and brought in Jonathan Liebesman to direct.”

He added, “Jonathan Liebesman is going to make a great film. From what I’ve seen of the script, it’s fantastic. Michael Bay has made some great and intense movies. We’re talking about being inspired by movies like The Avengers for scope and roots origin and The Raid: Redemption for fight scenes and Rise for the Apes as far as computer-quality style.”