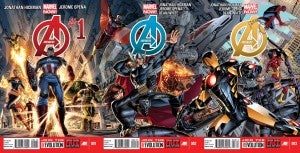 Last week, a retailer variant cover for the forthcoming Marvel NOW! Avengers #1 by J. Scott Campbell seemed to showcase a fairly small team that bore a striking resemblance to the movie's lineup, except without Captain America and featuring Spider-Man.

Now, Marvel Comics has released a three-part, interconnected series of covers for the first three issues of the title that suggest a team that's much larger and broader-reaching, integrating characters from the X-Men universe as well as a pair of female Avengers who have been widely speculated as possible additions to the team in the upcoming, as-yet-untitled movie sequel.

That shadowy, anonymous figure at the back has a Kirbyesque logo on his chest, and appears to my eye to be floating in place back there. Could this be someone imported from the Inhumans side of the Marvel Universe, perhaps?

Marvel is pleased to present your first look at the jaw dropping covers to Avengers #1, Avengers #2 & Avengers #3 by superstar artist Dustin Weaver! This December, the most popular heroes in comics together on one unbeatable team, twice a month – only in Avengers! From the blockbuster creative team of Jonathan Hickman and Jerome Opena, the Avengers “go large,” expanding their roster and their sphere of influence to a global and even interplanetary level. When Captain America puts out his call - who will answer?