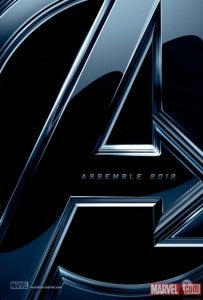 Just in time for the 2011 San Diego Comic-Con and in conjunction with the release of Captain America: The First Avenger, Marvel has revealed the first official poster for the highly anticipated The Avengers Movie.

If you want to see an actual print copy of The Avengers movie poster, it will be released in theater lobbies when Captain America: The First Avenger hits movie screens on Friday.

The Avengers movie is directed by Joss Whedon, and it stars Robert Downey, Jr. as Iron Man, Chris Hemsworth as Thor, Chris Evans as Captain America, Mark Ruffalo as Hulk, Scarlett Johansson as Black Widow, Jeremy Renner as Hawkeye, and Samuel L. Jackson as Nick Fury. The Avengers movie is scheduled to premiere in theaters on May 4, 2012.