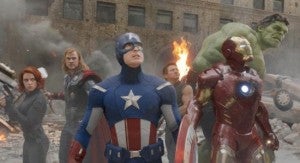 Onstage at the Variety 3D Entertainment Summit earlier this week, Marvel's executive vice president of visual effects and post production, Victoria Alonso discussed her career and the challenges of working on Marvel productions--and along the way shared some pretty interesting information about the behind-the-scenes workings of Marvel Studios. The effects maven, who has worked in both Iron Man films as well as Thor and Captain America before moving on to The Avengers and Item 47, started first by echoing something that Marvel Studios President Kevin Feige had told the audience at Comic-Con: That Marvel Studios is not as big as you think, either in numbers or in space. "Marvel is actually a pretty small movie studio and there aren't many of us," Alonso told the audience (according to NBC Latino). "We make big movies but we operate under the assumption that each could be our last and don't take any piece of that for granted." She added, "The best visual effect is the one you don't see but moves the story. We don't try to define the story with special effects. Iron Man has to fly from point A to point B, and it's my job to make sure he does that in the coolest way possible." The longtime producer had the most to say about The Avengers, including:

Of Iron Man 3, which she's working on now, the producer said, "This is a franchise I love. It's my baby. It's going to be a better film than the others and I'm working every day to make sure I do right by the fans who are looking forward to seeing it in May 2013."