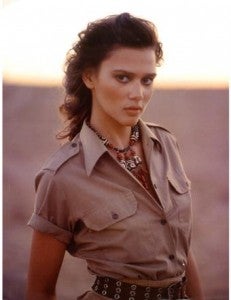 British actress and model India Wadsworth, who stars as "the Warlord's daughter" in Christopher Nolan's forthcoming Batman film The Dark Knight Rises, has been laboring under some pretty tight security since before she actually took the role.

According to a recent story at IGN, she was on the set for about ten days, but auditioned for the film without having been told what it actually was; the script pages she was sent to prepare were totally different from the ones she ended up actually reading in the audition, and even she isn't really sure what her role is or who "The Warlord" might be.

So, really, it's no wonder there's been so much speculation about who she might be or what her role in the film might end up.

Wadsworth, who has variously been speculated to be playing Bane's mother, Talia al Ghul and even some more far-out choices in the film, joined ComicBook.com for a quick interview to tease her role in the film, talk about the people she worked with and the intimidating experience of entering the world of Gotham City mid-trilogy.

How is it coming into a film like this, where it's not just a film but it's the third act of what's essentially one mega-film? You're coming into a cast and a crew that are already mostly working within a system that they know works and so it seems anyone new that comes in, it's got to be an adjustment for all involved.

Yeah, I think the whole project is such a huge thing that of course it's intimidating  but everyone was so welcoming. It was really great to meet everyone and they were very welcoming, so I think that makes up for this huge project that they were all so welcoming.

It's tough to know exactly what to ask, because as far as I know you're not allowed to say who your character is.

But I'm guessing you can tell us: Who did you actually get a chance to shoot with on the film?

Yeah, I did scenes with certain people, but not others. I worked with [Tom] Hardy, but I met Christian [Bale], and he's really lovely. I got to meet quite a few of the cast, and it was really fun.

Is it a bit surreal, all of this? You're part of this huge project and you're going to be a part of the press junket at some point, I assume, but at the moment, you're severely limited in what you can say.

Yeah. It's really hard. It is really hard, and surreal. But I guess that's part of the whole mystery and awesomeness of the whole film, is that you'll have to wait and see until it comes out. I'm looking forward to figuring out what I'm doing as well; I have no idea!

Are you going to be joining the press junket at some point, once your role is out there and everything, or is all of that still somewhat up in the air at this point?

Still all up in the air at this point.

That sounds a bit chaotic!

It is, a bit. We will see what happens. It's all the fun of the job, though; it's very exciting and this doesn't happen every day, so I kind of enjoy the whole surreal-ness of it.

Do you think this is a model that people will emulate, where these big franchise films try to keep even the smallest details out of the public eye so that the movies aren't spoiled right off?

I think because of the Internet and because of all the speculation and how easily word spread, I think in any movie if you've put a big budget into it, you don't want it to be ruined when people go to see it in the movie theaters. They have to get the audiences and so I think it generates excitement for the audience when people do speculate and try to guess the story and I think it's all part of the game.

Do you think part of that, too, is Nolan? Certainly Marvel did a pretty good job keeping certain things under wraps but by and large the characters themselves were pretty openly out there. Nolan, on the other hand, has said, "I'm going to tell you basically nothing about three or four characters, some of whom are pretty major, and you have fun with that." It seems like he has a real long view in his head and he's ten or twelve steps ahead of everybody else.

I totally agree, and I think that's how I perceived him. It was fascinating to watch him at work in his element and he is a genius storymaker, and that's part of the story is that it's all in his head and he wants you to figure it out his way and so that's part of the mystery is making sure you don't tell different parts of the storyline because it's all being created in his way and I guess that's the way his genius comes out in the end product.

This is the first time I've ever seen one of these "ultra-secret" movies where I actually feel like it may feel that was a necessary move. I mean, when you saw Star Wars Episode I they hid that script from everyone, including the actors, but I never really felt like it was a necessary thing other than commercially. With this movie it feels like it may actually be justified by the plot.

I think because also these amazing comic book movies--but they've been made over and over and over again, you know? The Amazing Spider-Man has come out really quickly, compared to the last Spider-Man movie. So I think that you do need to keep a mystery because there are so many comic book fans and people who know the story in and out.

But you're trying to make something different and something unique and creative. So yeah, I think it's great of Nolan to try and keep things under wraps because it's his own, new take on Batman and they don't want it to be compared constantly to the books or the other movies. I think that's all part of it, definitely.

Is it fun for you to take the other side of that fence? I mean, it's fun for us to speculate, but is it fun for you as someone who knows a bit more to watch us all running around speculating like crazy?

Yeah--I think that's like most movie sets, but definitely part of this one. I really enjoy it; it makes it exciting.

Something I think I can ask about your character taht I doubt will compromise you in any way is: The general perception is that your screen time is not huge but your plot impact is more substantial than that. Is that a fair assessement?

I would guess so, yes. I would agree with you; that's how I've taken it and that's why it's an exciting role even if it is a smaller role.

The Dark Knight Rises: Exclusive Interview With the Warlord's Daughter