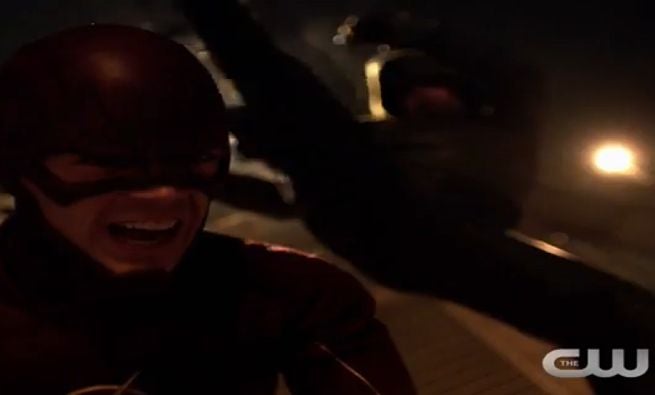 After the "Power Outage" episode of The Flash, The CW released a sneak preview for next week's episode, which is called "Flash vs. Arrow."

In "Flash vs. Arrow" episode, Barry (Grant Gustin) is thrilled when Oliver (guest star Stephen Amell), Felicity (guest star Emily Bett Rickards) and Diggle (guest star David Ramsey) come to Central City to investigate a case involving a deadly boomerang. Excited about teaming up with his friend, Barry asks Oliver if he'd like to help him stop Ray Bivolo (guest star Patrick Sabongui), the meta-human Barry is currently tracking. Bivolo causes people to lose control of their emotions and has been using that skill to rob banks. Unfortunately, the superhero partnership doesn't go as smoothly as Barry expected. When Oliver tells Barry he still has a lot to learn, Barry sets out to prove him wrong by attempting to stop Bivolo alone. However, when Bivolo infects Barry and sets him on a rage rampage, everyone is in danger, and the only one who can stop him is the Arrow. Meanwhile, Iris (Candice Patton) is furious when Eddie (Rick Cosnett) tries to get a task force to stop The Flash, Joe and Dr. Wells (Tom Cavanagh) agree the Arrow is a bad influence on Barry, and Caitlin and Cisco deal with a new team in S.T.A.R. Labs.