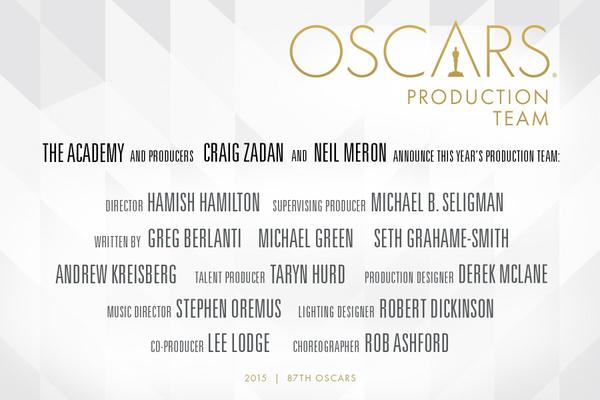 The Academy of Motion Picture Arts and Sciences has announced that Greg Berlanti, Andrew Kreisberg, Michael Green, and Seth Grahame-Smith will write the 2015 Academy Awards ceremony.

Brelanti and Kreisberg are known for their work writing and producing Arrow and The Flash for The CW, and Berlanti has begun work on a Supergirl series for CBS.

Grahame-Smith is the novelist who wrote Abraham Lincoln, Vampire Hunter, which he adapted to film in 2012, and Pride and Prejudice and Zombies, the film adaption of which is being shot right now and is expected to be relased in 2015.

Michael Green is the writer of 2011 Green Lantern movie, and was a writer and co-producer on the NBC television series Heroes. He has also had a run on te DC Comics series Superman/Batman, and is expected to serve as showrunner on the Starz television adaption of Neil Gaiman's novel American Gods.

The Flash, Supergirl, Pride and Prejudice and Zombies Writers To Script the Oscars