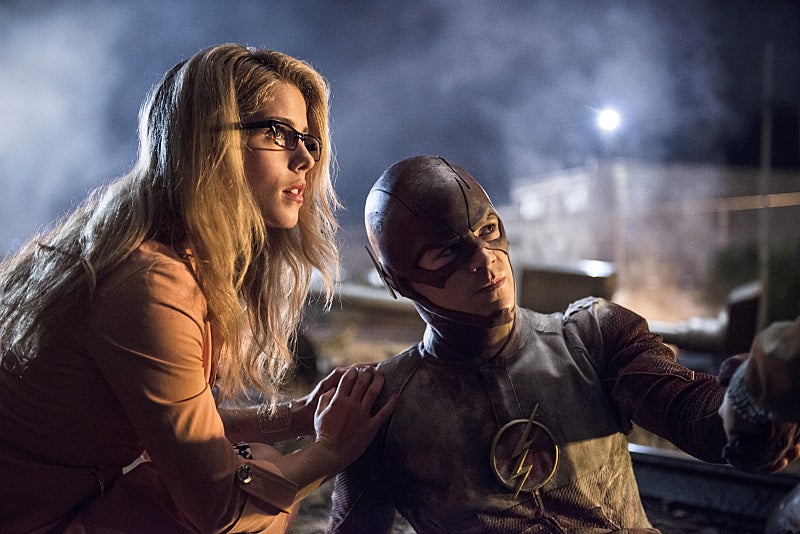 The episode will guest star Wentworth Miller as captain Cold, making his first appearance on the series, and Emily Bett Rickards as Felicity Smoak, Arrow's technical support and would-be romantic interest who last year had a brief relationship with Barry just before he was struck by lightning and went into a coma.

You can check out the episode synopsis and a bunch of photos from The CW below.

WENTWORTH MILLER GUEST STARS AS DC COMICS’ VILLAIN CAPTAIN COLD; FELICITY FROM “ARROW” CROSSES OVER INTO CENTRAL CITY — The Flash (Grant Gustin) stops a robbery but the culprits get away after shooting a guard, and The Flash chooses to save the man instead of following the criminals. Joe (Jesse L. Martin) shows Barry a book of suspects and Barry identifies Leonard Snart (guest star Wentworth Miller, “Prison Break”) as the leader of the group. While investigating the case, Barry gets a surprise visit from an old friend — Felicity Smoak (Emily Bett Rickards, “Arrow”), who heard about his new abilities and came to check them out for herself.

She joins him at S.T.A.R. Labs to help stop Snart after it’s revealed that Snart his gotten his hands on a stolen “cold gun,” which could kill The Flash. Dr. Wells (Tom Cavanagh) is furious when he finds out that Cisco (Carlos Valdes) built the cold gun without telling anyone and now it’s missing. Meanwhile, Iris (Candice Patton) is getting the silent treatment from Joe because of her relationship with Eddie (Rick Cosnett).

The Flash: Synopsis and Photos For Next Week's Episode, "Going Rogue"