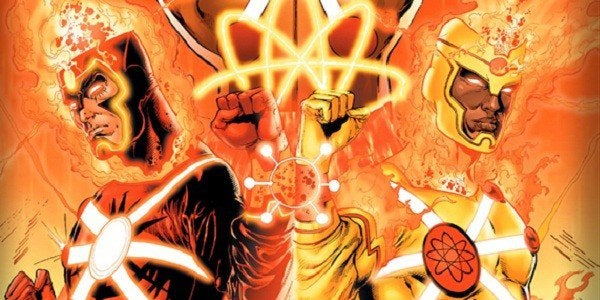 On tonight's episode of The Flash, there are a few mentions of something Harrison Wells calls the "Firestorm matrix."

In the comics, it's something that's been around for years, although its exact nature is sometimes somewhat fluid. Here's what you need to know:

Many have become and inhabited the Firestorm Matrix, which is essentially just a combination of two acting forces in control of the body of Firestorm. In most cases, Firestorm physically resembles one of the two individuals when not "flamed on," but some versions of the mythology have Firestorm as a force unto itself that is simply harnessed by the consciousnesses. Sometimes a fire elemental, Firestorm prefers to have two, as Professor Stein postulates that the power was never "meant to be" wielded by just one person. Attempts for one person to be Firestorm on their own have periodically seemed to work, but eventually the powers spiral out of control and a second consciousness must be added.

Depending on which iteration of Firestorm we're talking about, the exact rules for taking over the "driving" are different. In classic Firestorm stories, Professor Stein could often take over control of the Firestorm body when Ronnie was unconscious. In The New 52, that hasn't been the case, and when Ronnie was unconscious during a recent issue, Jason Rusch was unable to take over while Ronnie lost consciousness.

In almost all cases, it's impossible for control to simply be voluntarily handed over; in The New 52: Futures End, for instance, Jason Rusch is a helpless passenger inside of the Firestorm body and the woman who is trapped with him wants to get rid of the powers altogether -- something Jason would be much more suited to trying to figure out. Alas. Occasionally, a "passenger" is able to overthrow a "driver."

Ronnie Raymond seems to be the "preferred" host for the Firestorm Matrix. When Jason Rusch takes over the role of Firestorm, he can't hold onto a merge for any extended period of time, and has to change partners often -- except when it's Ronnie. Ronnie is usually the primary host when he's in the Firestorm matrix, regardless of who his partner is.

(Not on TV, apparently.)

According to the DC Wiki, Firestorm's passengers don't remember the merge after they're expelled from the body. They do retain the information locked in their head until the next transformation though. This was evident when Jason and Mick Wong merged for second time and while Mick didn't remember that Jason was Firestorm he did regain all of his knowledge when he became the "passenger" again. Prolonged exposure to the Firestorm Matrix without being the host or experience with Firestorm results in total loss of body and mind. The person simply disintegrates from his/her space, they are remembered but can never be reached again; once again Ronnie Raymond defies the case by returning after his apparent death.

The Flash: What Is the Firestorm Matrix?