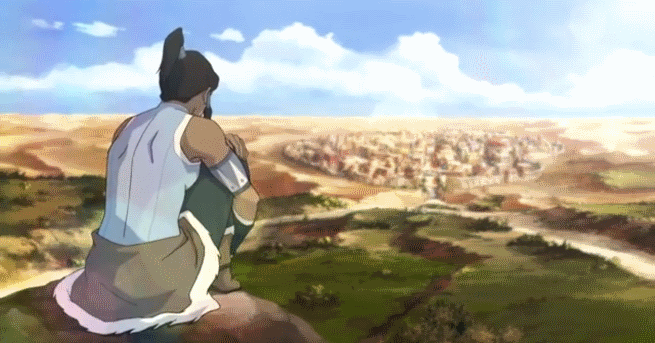 Chapter One: Breath of Fresh Air

The book opens with Bumi playing with a spirit near a tree. He chases the spirit and falls off a cliff and is only saved by his sudden ability airbend.

Korra, Tenzin, and Jinora are examining vines that have sprouted in Republic City, but are unable to find a solution.

The President of Republic City is dealing with the press at a conference when Korra arrives. The press are even more critical of her than the president. The president casts blame on Korra and Korra gets in his face until Lin breaks them up. Korra voices her frustration to Asami.

Back at Tenzin's home, Bumi tries to convince everyone that he can airbend but is unable to reproduce the effects. Bolin is staying with Tenzin's family since vines grew in his and Mako's apartment, but Mako is staying at the police station. Meelo throws a plate at Bumi and him airbends to stop it in the air.

Mako gets a call to go check out a scene of chaos. A man reports that his brother was suddenly able to airbend and caused all the destruction. Mako doesn't believe him, since up until now there have been only five airbenders. He finds the man's brother locked up in a room and the man airbends the door open.

Bumi is still unable to figure out how to trigger his airbending intentionally, and everyone else is still struggling to figure out how he's able to do it at all. Lin and Mako show up and tell Tenzin and Korra about the other case. Korra offers to help, but Mako says its police business. Korra reminds Mako that he's free to stay with them, but he still passes.

Korra and Asami decide to search for the other bender and try to find him before Mako. Asami gives Korra the keys to the car. Turns out Korra is not a great driver. Korra and Asami have a discussion and reveal everything about their past romantic dealings with Mako. The almost crash into a vine and a spirit pops out of it, blaming Korra for the way the world is. Korra gets an idea to get rid of the vines, but needs lots of water.

Tenzin is reflecting on the new airbenders. He tries to explain the situation to family and reflects on what this could mean for the air nation.

The president shows up with the press to see how Korra's plan goes. Korra taps into her Avatar state and bends water around the vines, then uses her abilities to calm the vines. The vines recede for a moment, but only come back at twice the size and all but destroy an apartment building.

Tenzin approaches Korra while she's meditating. She's trying to reach her past lives, but can't. She asks if she ruined everything but leaving the spirit portals open, but Tenzin says she just did what she thought was right. Tenzin reminds her that she's not the president, her duty isn't to take care of the day to day lives of the people but to bring balance to the world at large. He's thankful that Harmonic Convergence may have brought back the Air Nation. Bolin arrives and alerts them that Mako's airbender is standing on the top of the bridge and won't come down.

Lin's metalbenders try to get close to the new airbender, but he sends them flying away. Korra flies up and talks to him. She talks him into going to Air Temple Island, but he slips and falls. She catches him and introduces him to Tenzin. The president criticizes Korra gain and orders her to leave the city. She's more than willing to go. She tells Tenzin that she plans to leave and rebuild the Air Nation. Tenzin intends to go with her.

Several men who look to be members of the White Lotus society are bringing food to a prisoner. The prisoner tells a story of a great, old airbender who learned to be weightless. The man uses airbending to get ahold of one of the guards, who says the prisoner was never an airbender before. The prisoner fights his way through the other guards and locks them in his former cell. The man declares it to be the age of the end of the White Lotus and, soon, the end of the Avatar.

A Future Industries airship arrives at Air Temple Island to bring Tenzin, Korra and crew to Ba Sing Se to search for airbenders. Mako arrives with information about airbenders popping up in the Earth Kingdom. He gives Korra a map of airbender activity locations. Korra tries to convince him to come with them, but he refuses. Bolin chases after Mako to try to talk him into coming. Mako says he feels like he's been drifting apart from everyone. Bolin reminds Mako that their father grew up in the Earth Kingdom and their grandmother might be there. Mako agrees to go. They take off in the air ship and plan to hit all of the towns with airbender activity before reaching Ba Sing Se.

Zahir, the prisoner who escaped in the last episode, sneaks onto another White Lotus prison located in the ocean. Another prisoner, Gazan, is there. Zahir throws rocks into his cell and he earthbends his way out.

Team Avatar arrives at the town and meet a farmer who can now airbend. Tenzin tells the farmer that he'll help rebuild the Air Nation, but the farmer has no intention of leaving his family and his farm.

Back on the airship, Team Avatar discuss their failure to get the farmer onboard. Tenzin says airbenders must come freely. From town to town, Tenzin isn't very successful in convincing people to adopt the air nomads' monkish lifestyle. Korra goes to see the next airbender and, after an argument, tries to take him forcefully. It doesn't' go well and he stays behind.

Team Avatar decides to go to Ba Sing Se and try a more theatrical approach. Bolin introduces Tenzin and sets up a false fight between Korra and Mako, planted in the crowd. He shows off the air bison and lets Bumi and Jinora show their skills as well. One young boy agrees to join them.

Korra explains the deal to the boy, and he's still in. His name is Kai and he seems anxious to leave. He tells them that he's an orphan, so there's no need to get parental permission. He says his parents died defending him and the village from bandits. As they board the airship, men on motorcycles show up looking for Kai. He says they're the outlaws. They're earthbenders and begin fighting Korra. They say they're the sheriff and his deputies and that Kai is a thief they've been chasing for a month. Mako caught Kai as he was trying to run off with a sack of gold. Turns out he was an orphan who was adopted and took off with his family's life savings. Korra negotiates to take Kai with them, leaving the money behind. Mako let's Kai know that he's watching him.

Back at the White Lotus prison, a guard is informing Firelord Zuko of the escaped prisoners and Zahir's new airbending abilities. Zuko says to warn the Water Tribe and the Avatar and heads out to stop the criminals.

Bumi is training his new airbending abilities with Kai. Bumi gets taken down by Kai and Kai steals his wallet while he's not looking. The airship is coming up on Ba Sing Se, the Earth Kingdom Capital split into different ringed districts.

When the reach the inner ring, the Grand Secretariat explains the long list of rules for meeting the Earth Queen. The Secretariat lead Korra to the Queen. The Queen was assumes that Korra wants something from her. She mentions that the United Republic was built on land taken from the Earth Kingdom by Zuko and Aang.

The rest of Team Avatar notices that Kai is missing. Mako thinks he's not worth chasing after, but the others convince him to go looking for him with Bolin.

The Queen says that if she's to help Korra find the airbenders in Ba Sing Se, she wants Korra to retrieve some stolen tax money for her.

Kai is using airbending to pick pockets in the city. Mako and Bolin find him and chase after him. He manages to escape by running on and off a train, leaving Mako and Bolin on board. They arrive in the Lower Ring and try to pay for a train ticket back to the Upper Ring, but realize Kai has stolen their money.

Zuko arrive at the Northern Water Tribe and meets with the new chiefs, Desna and Eska.

Korra and Asami go to retrieve the tax money. Bolin and Mako spent the night sleeping on a trash heep. Kai slept in an expensive inn. In the city, Mako and Bolin end up meeting their uncle and cousin. They bring them to meet their grandmother have to have break the news that their parents are dead.

Korra and Asami arrive to take the tax shipment and are attacked by bandits. They manage to fight them off, but Korra's not sure that they're on the right side of the fight.

Zuko, Desna, Eska, and Tonraq travel to the secret White Lotus prison where a firebender is being kept.

Mako and Bolin's uncle catches them up on why their father left Ba Sing Se, because he wanted to see the world. Their grandmother shows them the only letter they ever got from their father, telling them about his wife and children with a picture. Their father is wearing Mako's scarf in the picture, and Mako gives the scarf to his grandmother.

Korra returns to the Queen. The Queen says they didn't find any airbenders, but Korra knows she's lying.

Mako and Bolin's family tells them that the Queen has been gathering up airbenders and may be experimenting on them in secret.

Out on the street, Kai gets taken captive and thrown in a cell with a bunch of other airbenders. They're told they are now part of the queen's first airbending regiment.

The Legend Of Korra Book Three Premiere Recap With Spoilers