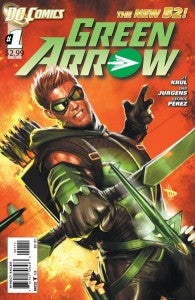 After last week's runaway success and acclaim for Justice League of America #1, the first book in the much-discussed relaunch of the entire DC universe. I was blown away by last week's first issue, and this week thirteen more number ones follow in succession. As part of my commitment to you, our loyal and dedicated readers, I'm reading all fifty-two first issues and grading them on a "school scale", from F to an A+. With that, we lead this week's round of reviews with an interesting collection of heroes, typically not associated with the very top tier of DC: Green Arrow, Hawk and Dove and Animal Man. First up, the emerald archer!

Green Arrow #1: I'm not sure if I'm glad or upset with myself that this was the first DC comic I read this week. While Green Arrow has always been one of the edgier heroes of the DCU, that edge doesn't translate too well in this first issue. Oliver Queen still is set up here as a sort of anti-establishment anti-hero, a role he takes on in both in his role as the head of Q-Core, a major technological company and as Green Arrow, hero with an edge who's not afraid to hurt the bad guys a little for the sake of taking them down. The issue opens with tension between Queen and CEO Emerson of Queen Industries, the parent company for Q-Core, while the whole time the phone conversation takes place, Green Arrow is running around Paris, tracking down a batch of odd supervillains, and I use that term loosely. Helping Ollie in his adventure are friends Naomi and Jax, who seem to serve as a cross between Oracle and those annoying kids in the old Super Friends cartoon. While the book attempts to establish GA as a "badass" or sorts, it comes across as too obvious that he's trying to be badass. The villains he faces are communicated so obviously and weakly that the "battle" with them feels telegraphed and unimportant. While first issues are meant to establish the characters, this one feels like a formality rather than an attention grabbing intro. It's not spectacular, but it's not awful either, and Dan Jurgens does a great job on the pencils, with George Perez's work as inker as sharp as ever. He's hoping issue #2 hits the mark. Grade: C- 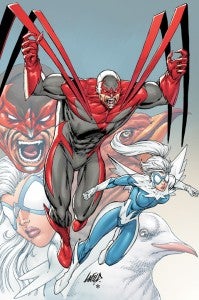 Hawk & Dove #1: While this pair has been around the DCU in various combinations for the past several decades, their self-titled series have rarely taken flight, if you'll pardon the pun. With Sterling Gates at the writing helm for this series, hopes are high, so let's see how this one shakes out! With an opening sequence and villain that takes the story back to the days of the original Hawk and Dove, who were commentaries on the clashing ideals of the late 1960s Vietnam War era with Peace and War embodied in these two avian heroes, and the first several pages offer an intriguing premise of how these heroes reflect those ideals in our complicated political times. As the pair battle creatures over Washington D. C., they verbally spar over Dove's tactics versus Hawk's, and Hawk's insistence that Dove step up her game gets a little grating and overdone, more so since it becomes a recurring element of the story, loudly touting how Hank/Hawk longs for the days of his deceased brother, the former Dove, as his partner. However, Dove has some secrets of her own, which she confides to boyfriend Deadman, yes, Deadman. While the issue as a whole is well executed, the scenes focusing in on Hawk's angst over his partner are a bit strained, as well as an odd scene between the duo and a Washington agent, who has a common enemy in the terrorist they thwarted earlier. A surprise ending, along with great art from Rob Leifeld, make for a solid and mostly balanced opening issue. Grade: B 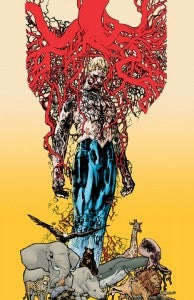 Animal Man #1: Perhaps one of the more surprising heroes to make the grade and get their own series in the DC relaunch is Animal Man, a superhero who has been on again and off again over the course of his career in comics. He is reimagined here as a very left-wing, liberal animal rights activist, whose role as a superhero has morphed into that of an activist and now actor. The issue presents us with Buddy Baker, Animal Man, as a family-centered guy who delves into heroics now and then. With an understanding wife and two interestingly normal, on the surface anyway, children, Baker makes a go at a normal life until an incident at a local children's hospital wing thrusts him back into the hero role. Showing off some nifty uses of his animal capabilities, with everything from rhinos and bumblebees used in this issue, Animal Man proves to be an intriguing hero in this sense. However, just when you think this will be another story about a hero finding his balance between home, work and superheroics, the story takes a dramatic and disturbing turn. What follows is a disturbing dream sequence, hinted at previously by some physical reaction after the incident at the hospital. A world of blood, his children in peril and more await him in the dream, and when we awakens he dashes out to his yard to discovering a frightening scene with his daughter. Jeff Lemire's script and Travel Foreman's artwork complement each other nicely, and Foreman's art especially has an angular and clean feel to it that allows the story to unfold. This is one series that I am already excited about its second issue. Grade: A